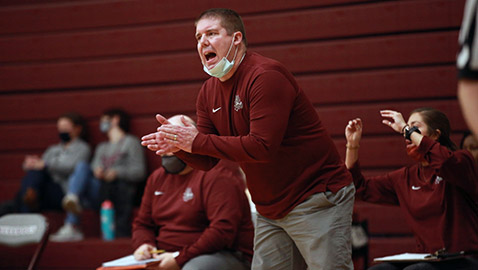 In acknowledging his selection as this season’s Knox County boys basketball Coach of the Year, Bearden’s Jeremy Parrott quickly turned the spotlight on his four assistant coaches.

“I’ll tell anybody,” said Parrott last week, just days after his Bulldogs added a District 4-AAA tournament title to their regular season championship. “We’ve got the best basketball staff around. I’ve got guys here that work with us that help me a great deal. They make our program better. They make me better. They make the players better.

“Coach of the Year honors are really cool, but I like to call it Staff of the Year honors, because I don’t do this alone. I’m blessed and thankful that I’ve got guys that are doing things for the greater good of our program.”

“They carry a lot of the load in our coaching staff and they coach our JV and freshmen teams too,” said Parrott.

Place is the JV coach and West the freshmen coach.

“They come and help us mostly on game days and practices when they can,” said Parrott. “They are key to our team as well.”

The Bulldogs went 14-0 in regular season play and were ranked No. 2 in The Associated Press’ final Class AAA state rankings. They took a 26-3 record into the Region 2-AAA tournament.

Catholic’s Mike Hutchens and Concord Christian’s Mike Wilkins tied as runners-up in the Coach of the Year voting, which was based on regular season play. Ricky Norris of Webb was fourth.

“I tell our players all the time and I think anybody who has been in coaching for very long understands how hard it is to win a (regular-season) conference title,” said Parrott. “It’s a grind. It’s night in and night out. You’re playing teams that are very familiar with you and you’re familiar with them.

“I consider that one of our proudest achievements this year regardless of where we end up.”

Underwood  ‘blessed’ to have talented team

Bearden’s Justin Underwood was a runaway winner in the balloting for girls’ Coach of the Year in Knox County.

“It’s very kind of my peers,” said Underwood. “Anytime you’re nominated for an award from those that are doing what you do and know the highs and lows that go with it, it’s greatly appreciated to be respected amongst your peers.”

Underwood said he didn’t know any coaches who seek out the Coach of the Year awards.

“Those awards usually come from your team’s success,” he said. “I’m very blessed that we’ve got a ton of talented athletes. Sometimes you try to not mess it up, so to speak. But we’ve got some really good pieces and some kids that are very determined and focused to win. I’m very blessed to get to be the one to coach them.”

Underwood’s Lady Bulldogs have lost only one game this season and came into the region tournament with a 26-1 record. Like Bearden’s boys team, they also were ranked No. 2 in the state in the final AP poll.

The Bearden girls also are ranked No. 23 in the nation by MaxPreps.

Commenting on the regular season, Underwood said, “I think it’s a part of the marathon.

“The regular season title checks off the box of the goal that is set every year. That’s a fantastic accomplishment and I tell our girls that we never want to be complacent.

“Then the slate is wiped clean and you start again with tournament play, which can feel a little bit like a whirlwind,” added Underwood. “This part seems a lot quicker than a regular season, but I think so much of it comes from the groundwork and foundation that you have put forth the first four months.”

Underwood also said he and his team are very pleased to have endured the rollercoaster of a pandemic season and still be playing.