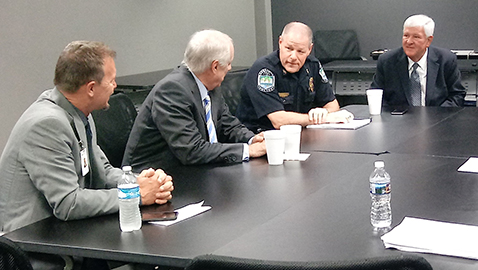 Former Tennessee Governor Phil Bredesen is a candidate for U. S. Senate but you may be surprised to learn that when he sat down with Knox County medical professionals and law enforcement officials Tuesday there was no mention of his campaign.

The visit to the Helen Ross McNabb Center on Springdale Avenue was given little fanfare.  It wasn’t a campaign stop but a listening session in which Bredesen did most of the listening. He occasionally asked a question but, for the most part, sat and listened.

“Before I talk about it I’d like to learn about it,” Bredesen told the meeting of the opioid problem, adding, “I’m looking for ideas to turn into action.” He said he had met with the pharmacy school at ETSU the day before on the same issue.

Bredesen heard how the local coalition is working with local news media and physician training on limiting opioid prescriptions.

Dr. Jerry Epps, chief medical director at UTMC, told the meeting that a short-term prescription could turn into a patient still taking opioids a year later.

Bredesen asked the two law enforcement officers what is the easiest way to find physicians who abuse prescriptions. Chief Rausch said that the health department often notifies him.

The discussion quickly turned to pain management clinics and Bredesen said that legislation issued under Governor Haslam closed a lot of the pill mills. Vagnier  said that Knox County once had 42 such pill outlets and now only has five that remain open.

Rausch said that the city sends in undercover people to check on the pain centers and  to see if the centers accept cash, which is against the law. The police chief also noted that although Medicare tracks doctor’s prescriptions, the information isn’t shared with local law enforcement.

Dr. Epps noted that a new prescription law is going into effect which will limit the number of days opioids can be prescribed and added, “It’s going to be interesting over the next six weeks” to see how the change affects the crisis.

He noted that opioid addition is now among a younger population and often people who would never abuse illegal drugs get addicted and, legally, lumped together with all addicts.

Bredesen asked if a blood test could indicate opioid use and was told it would not but a brain scan could.

Nichols noted that our nation has 90% of the world’s opioid users and said that 100% of the property crimes in Knox County are drug related. One comment was that the federal government has made little or no effort to combat the opioid problem in our region.

Bredesen said he is looking for two or three practical things to combat the epidemic. He included going after abusing physicians and pill mills and educating of the public as a possibilities.

“This is really helpful,” Bredesen said of the input during the meeting and, at the end, he promised, “I’m not done yet.”