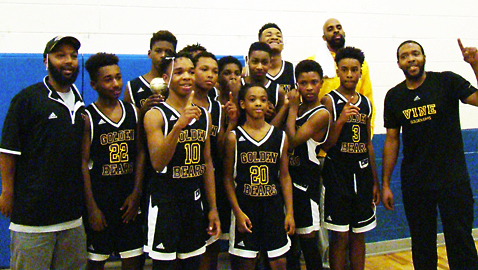 The Golden Bears, who won only three games last season, erased a six-point deficit with an 11-point run to end the third period and withstood the Panthers’ comeback bid down the stretch at Karns’ Thomas L. Duff Memorial Gymnasium.

“It’s been a long year,” said second-year head coach Jerel Heyward. “I want to dedicate this win to our kids. My kids have been through a lot this year off the court. They found a way to bond together even when there were a lot of things against us. It shows what you can do when you do honest hard work and keep a good level head.

“And this win is for our entire community. It’s not just for the kids. You saw all that support we had out there tonight.”

Jones was held without a field goal, getting all of his points on the free throw line (8 of 13).

“I think he (Jones) scored 23 the first time we played them,” said Coach Heyward, “and coming into this game, we just decided we were going to try to take him away as much as possible, because he’s an elite player. It forced other guys to step up, and as you could see that worked out real good for us.”

The third period heated up. Trailing 20-16, Vine’s Washington received a technical foul when he slammed the ball down on the court after being called for a personal foul. Jones swished in both of the technical foul shots to give the Panthers a six-point advantage with 4:43 on the clock.

Less than a minute later, Powell’s Cole Kellenberg was called for a technical foul after making a hard personal foul on Pruitt as he was shooting. Pruitt missed his two free throws, but Bredwood made both of the technical foul shots.

By rule, the Golden Bears also were given possession of the ball after the technical and Pruitt hit a floater to reduce Powell’s lead to two (22-20).

On Vine’s next possession, Bredwood was fouled as he drove for a basket and his free throw put the Golden Bears on top 23-22.

An old fashion three-point play by Pruitt and a free throw by Shannon Blair with 3.9 seconds left in the third period capped Vine’s winning run.

Powell standout Noah Chapman drew his fourth foul early in the third period and was on the bench during Vine’s go-ahead rally.

“That drought was due to some foul trouble and credit to them for shifting the momentum and making some big plays and key buckets,” said Powell Coach Darin Courtney, whose team’s 23-2 record this season tied a school record for most wins.

The Panthers got as close as three points (28-25) midway through the final period on a layup by Haley but couldn’t get any closer.

Chapman fouled out with 1:50 remaining as Roebuck’s free throw gave Vine a 31-26 lead.

The Golden Bears stretched their lead to eight (34-26) with 1:03 to go. Bryce Burkhart made two free throws for Powell and the desperate Panthers came up with the ball again. But Vine got it back and Blair hit a free throw with only 37.9 seconds to go.

Vine players and cheerleaders stormed the court after the final horn.

THIRD PLACE: Bearden upset No. 2 seed South-Doyle 43-28 in the boys consolation game. The Bruins, who outscored the Cherokees 19-9 in the second period to go up 25-13, got eight points from Tyrone Smith and seven apiece from Will Biven and Preston Lamb. DeMarcus Bradley paced S-D with eight.

TOURNEY’S BEST: Vine’s Javaree Roebuck was selected the MVP and was joined on the all-tournament team by teammates Izaiah Bredwood and A.J. Pruitt. Other all-tourney honorees were Parker Haley, J.R. Jones and Noah Chapman of Powell, Tai Cates and Ke’on Smith of South-Doyle and Ryan Neal of Bearden.