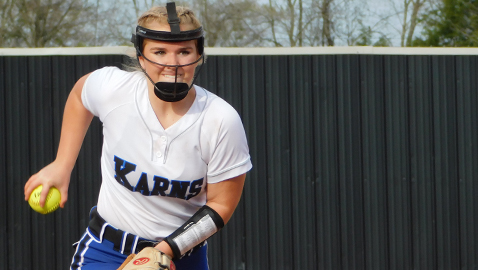 Every Karns fan in the stands was probably scared to death, wondering if the right fielder was going to get there in time to make the catch.

But Elizabeth Breeden didn’t let them down. She got there just in time to make the game-ending catch and give the up-and-coming Lady Beavers a 2-1 softball win over Anderson County last week at Karns.

“Yell, one of those (hit in shallow right field) is always scary, but you’ve got to have confidence and leave it all out on the field,” said Breeden after the game.

Breeden came a long way and was only one step from the infield dirt when the ball fell into her glove.

“As soon as I see it go up, my first thought is to find the ball and get to it,” said Elizabeth, describing the play. “As the outfielder, I have the call over the infielders because I have better position on it. As I get closer, I start calling for it – ‘ball, ball, ball’ – and I just go all out to get to it.”

The second baseman heard Breeden’s call and pulled up to prevent a collision.

It was a huge play by the junior, who is a three-year starter and can play any of the three outfield positions.

It was Karns’ second big District 3-AAA win of the season. The week before, the Lady Beavers had upset Powell 8-3.

Anderson County had suffered its first district loss the night before against Powell.

“I think coming out early in the season we were struggling to find what worked,” said Breeden. “But once we started working together, I’ve felt like we were pretty unstoppable.

“We work hard together. We’ve got individual talent and team talent and when we put it all together good things happen.”

Karns took a 1-0 lead in the third inning. Alyssa Maples singled and Anna Kate Reichter beat out a dribbler to put runners on first and third. Maples scored on Shelby Armstrong’s single up the middle.

The Lady Beavers added their second run in the fourth inning when Emily Cox doubled and scored on Abby McPherson’s single.

Taylor Spencer pitched shutout ball through the first five innings, but it took catcher Gia Price tagging out the Lady Mavericks’ Abby Buswell, who got caught in a “pickle” between third and home, to keep AC scoreless. Buswell had rounded third on MaKenzie Henderson’s double when she got hung up in the rundown.

“We just wanted to mix it up right there and bring in our other freshman to give Anderson County a different look,” said Webb. “They were coming up to the top of their order in the sixth and seventh. I thought maybe we could get them off balance there with a different look.”

Leah Elkins led off the AC sixth with a single and a Karns error put another runner on base. But Maples got a line out to first base and a ground out to second to keep the Lady Mavs scoreless.

After Karns went down in order in the bottom of the sixth, Maples faced the heart of the AC batting order. Buswell led off with her third hit of the game, the next batter walked and a sacrifice bunt moved the runners to second and third with one out.

Maples got Elkins to fly out to center field and on the play an Anderson County base runner also was called out for leaving the base early. That would have ended the game, but the umpires got together and the call was reversed.

With runners still on second and third, that’s when Kaitlyn McKamey hit the ball to shallow right field and Breeden made her game-ending catch.

“Elizabeth is our leadoff batter and one of the fastest players in the area,” said Coach Webb, recalling the play. “She can cover a tremendous amount of ground.

“I’ll put our outfield up against anybody. We have nice speed out there and they do a good job of reading the ball off the bat and getting to it quickly. That was a big play. They could have scored that run and tied it up and then we could have gone into extra innings. But Elizabeth came up with a big defensive stop.

“And that’s what we told our girls at the end of the game. Your defense is what won you that ball game.”

It was a key win in the district for Karns.

“This win means were still in the hunt for a top seed going into the post-season run, and that’s what we’re trying to get these girls ready for and what we’ve been trying to instill in them,” said Webb. “The talent is there.”