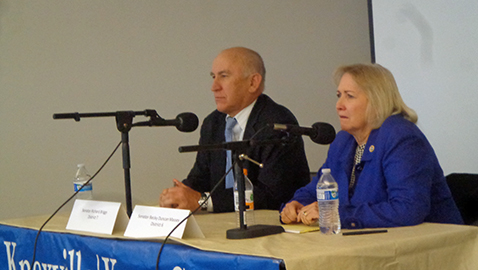 In recent weeks members of the local state legislature have been meeting with various groups including the Knox County Commission and the Knoxville City Council.

When Knox County’s two state senators, Dr. Richard Briggs and Becky Duncan-Massey, sat before the League of Women Voters recently neither of them probably expected to be asked some hard ball questions. It was obvious that the audience welcomed both elected officials but it was also obvious that some audience members had some strong disagreements with the two senators.

“There is a lot of things coming from different directions,” said Senator Massey.

The mention of “voter fraud” prompted the President of the League of Women Voters, Linda Maccabe,  to immediately step forward as the crowd yelled “No” at Brigg’s remark.

“I believe the Knox County Election Commission has done an exceptional job,” she said, adding, “I am absolutely confident in their ability to make sure that the voting is clean.”

Senator Massey agreed that “Knoxville is best” and the election commission “does a really fine job.”

“I agree, I think it’s that way everywhere in the United States. That’s not what I said,” Senator Briggs said.

“What I said is that it’s being brought up. To say it’s not been in the news is denying reality. What we have to do is that when we register people to vote we need to make sure it’s ironclad and defensible. We do a great job in Knox County and I think we just need to put it to rest,” Briggs said.

He went on to question registering people to vote when they get a driver’s license.

“Do you have to be a citizen to get a driver’s license?” he asked, mentioning undocumented workers may want to get a license.

Massey then changed the subject by talking about her bill that will change the underage license beginning this summer. The vertical ID could make it more difficult for underage drivers to buy alcohol.

On allowing the use of medical marijuana in the state Briggs said the issue will be back before the legislature this year. He said he served on a “joint taskforce” in the last session but voiced no opinion on the issue.

Massey and Briggs were praised for their stand for “Insure Tennessee” and Briggs lamented the closure of 11 rural hospitals in the state. Briggs also commented that the hospital association will be bringing up the issue of health care up again.

On the issue of school vouchers and charter schools Massey said she supports charters but not vouchers. Briggs said, “We don’t need vouchers in Knox County,” adding that a parent can change a child’s school with a request to the school board.

Massey said she supports charter schools because they are controlled by the local school board.

Speaking to a question about undocumented college students Briggs said permitting that attendance by tuition passed a senate committee but failed in a house vote.

Massey, who just last Thursday was appointed to the Senate Finance, Ways and Means Committee, told the audience that most of the legislation that comes to the floor in Nashville goes through the various committees first.

The two senators were also asked about removing Confederate statues in the state. Briggs replied that decision should be left up to local Historic Commissions but talked about Nathan Bedford Forest’s repudiation of the KKK in the former Confederate general’s later life.

On the subject of gun control and the current gun-carry law Briggs said the state laws have “worked pretty well” with background checks and gun-safety training. Asked about allowing teachers to go armed in schools Briggs said it was not “a yes or no issue” and added he “has some serious concerns about that.”

Massey said that an opioid bill will probably come back before the legislature this year and Briggs said he’s concerned with the growing number of “private prisons” in the state.