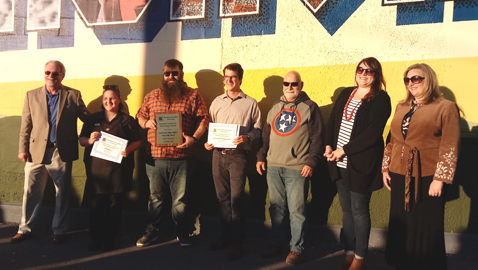 Three businesses were honored by the Broadway Corridor Task Force last week for efforts to renovate and improve buildings along the busy North Knoxville route.

All the recognitions came from façade and renovations to buildings that enhance the street and invite visitors to the area.

Honored with a certificate was Wendy’s Restaurant. Courtney Russell accepted the award for the 3000 North Broadway location.

The top award went to Nothing Too Fancy for their building at 1135 North Broadway. Dustin and Lisa Burnett and Dustin’s father John accepted the plaque.

Rider opened the ceremony by recalling the history of the Broadway Corridor Task Force which began in 2013 as an idea. She said volunteers asked the city to get involved and restoring the area became an on-going project.

Tener called the improvements taking place along Broadway “a renaissance and tremendous change.” He said that his 35 years at Broadway Carpets reflects that and that the task force has been working to give the neighborhoods and businesses a route to improvement.

The task force continues to stimulate collaborative and construction discussion. Its focus area is the Broadway Corridor from Fifth Avenue to I-640. The group is made up of representatives from North Knoxville businesses and professional associations as well as the neighborhoods of Bell Morris, Edgewood, Fairmont, Emoriland, Historic Fourth and Gill, Old North Knoxville and Oakwood-Lincoln Park.