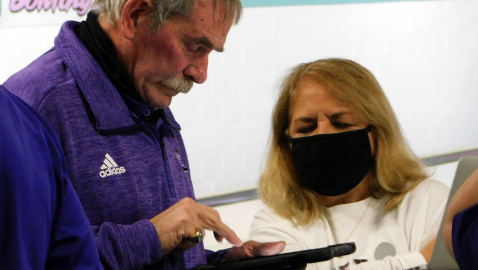 But it wasn’t enough to keep the Carter girls bowling team’s season alive in the Region 2 tournament semifinals last week at Crest Bowling Lanes in Maryville.

Brooks, a senior and Carter’s leadoff bowler, posted a 201 in the second game of the series. She also rolled games of 147 and 146 for a match-high 494 series.

Carter came up just short in only its second season of having a bowling team.

“You knew it was going to be close,” said Lady Hornets Coach Ray Wynn. “I’m so proud. We’ve never been here before. They came out and competed and made adjustments.”

This Carter team laid the foundation for the program felt Wynn, and it had only two seniors – Brooks and Elizabeth Umbarger.

The Lady Hornets will return the 2-3-4 bowlers in their lineup – sophomore Hallie Lane and freshmen cousins Kayla Rucker and Gracie Miller.

Gracie rolled Carter’s next best game of the match – a 144.

Abigail Mauritcio led William Blount with a 179 game. Olivia Leuking contributed a 165. Lily Durman chipped in a 158. Sheyenne White had games of 156 and 153.

In Saturday’s sectional round, William Blount was scheduled to host Dobyns-Bennett, while Sevier County traveled to Rogersville to battle Cherokee High.