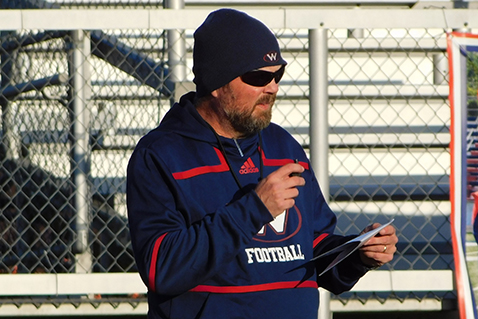 Brown says it’s a testament to his assistants and team

Lamar Brown is a coach’s coach.

He has earned the respect of many local coaches with the program he has built at West High School and by continually knocking on that playoff door with the gold football behind it.

This season has been extra special for Brown and the Rebels, who posted the first 10-0 record in the regular season in school history. West also outscored its five Region 2-5A opponents 233-3 en route to the title.

Such dominance in the region played a part in Brown being voted the 2022 Knoxville Focus / Coaches’ Knox County Coach of the Year, which was based on regular season results.

Notching wins over state powers Alcoa and Maryville – non-region foes that Brown chose to put on the schedule – made 10-0 even more sparkling. And ending Knox County’s 105-game losing streak to Maryville also was a bonus.

Learning of his selection for the award, Brown quickly turned the spotlight on his coaching staff and players.

“I think it’s a testament to my assistant coaches and this football team,” said Brown, prior to a practice session last week.

“I’ve surrounded myself with great men that are coaches that help way beyond football. They are dads to some of these guys and everything in between.

“But credit goes to the players,” added Brown. “They’ve been unbelievable this year. It’s really been a fun group to coach. They’re good football players, but they are great young men and that’s a testament to them.”

Brown said he had won Upper East Tennessee Coach of the Year awards a couple of times when he was at Morristown West. “But this is the first time in Knox County and that’s a great honor.”

Coach Brown’s teams have gone far in the playoffs each of the past three years.

In 2019, Brown and his Rebels lost at Central 10-0 in a physical semifinal playoff game. The Bobcats went on to win the state championship.

A controversial call that went against West preceded Oak Ridge’s winning touchdown in the 2020 quarterfinal round at West. The Wildcats escaped with a 31-28 victory, and then ousted South-Doyle in the semis before losing in the title game.

Last year, Powell rolled to a surprisingly easy 35-7 semifinal win over the mistake-riddled Rebels at West. Fans on both sides were expecting a close game. Powell notched its first state crown the following week.

Brown said his peers’ votes in the balloting meant a lot to him.

“There’s a lot of great coaches here in Knox County,” he said. “A lot of those coaches have helped me out a lot. Even when I was at Morristown West, a lot of these guys here I would lean on and consider my friends.

“The coaching fraternity here in Knox County is a great thing; not just good football coaches, but a lot of great men leading young men trying to make this world a little bit better place.”

Brown has been amazed with how many coaches have been pulling for him and his team this year.

“It seems like every week after the game or before the game I get a text from a lot of coaches in Knox County, wishing me luck and say they are pulling for us,” said Lamar.

“It seems like before and after every game Clark Duncan is sending me a text. He’s one of them. He’s retired, but Clark was a great mentor and I just watched the way he did things.

“Eddie Courtney is another one at Farragut,” added Brown. “Just the way those guys carry themselves. It’s great to have someone you can look up to in this profession and that you know does it the right way.”