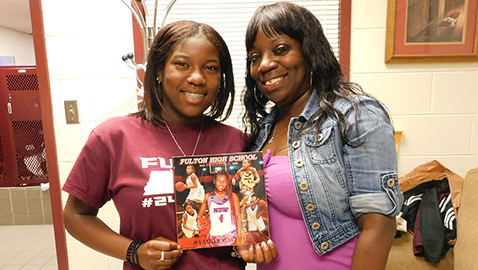 Aniiah Matthews signed scholarship papers with Bryan College on May 13. Her success as a Fulton High student and athlete combined will provide her a “full ride” on the next level, said girls’ basketball head coach Tyler Howell last week.

Matthews had a “big impact” in the success the Lady Falcons have had over the past four seasons, said Howell.

Aniiah, a three-year starter and two-time All-District honoree, was a point guard and a lock-down defender.

Academically, she earned a 4.3 grade point average and will graduate in the top 10 percent of her class. She also is a National Honor Society recipient and a National Achievers Scholar. She wants to major in criminal justice.

Howell became head coach at Fulton when Aniiah was a freshman.

“We started together,” said Tyler in his office Wednesday as he and Anniah were interviewed by The Focus regarding Matthews’ accomplishments at Fulton and plans for the future.

“She’s had a lot of stuff adversity-wise to deal with off the court throughout her career,” said Coach Howell. “It hasn’t always been easy for her. I think the one thing that’s probably stuck out – she’s always left that to the side and put her effort and commitment to the program the best she could.

“A lot of stuff she’s dealt with off the court, I don’t know if many people could take it in and keep going. She’s a tough kid. A good character kid. Like I said, she’s been able to handle a lot of adversity off the court.”

Aniiah decided to talk about the adversity she had overcome. Her mother, Tiffanie, sat close by as Matthews spoke about her past.

“It’s been a lot, but mainly, well momma, she’s got a lot of health problems,” began Aniiah. “And then when I was younger, my daddy came in and shot my momma seven times in her stomach right in front of me. So he had got locked away and basically she barely survived. She had to learn how to eat all over again.

“As I got older, she started to have other health problems. Just this last year, she had hysterectomy surgery and wasn’t able to function right. So we took her back and she ended up having an abscess on her bladder. Last year, I almost lost her. Basketball really kept me going. She and Tyler were really all I had.”

Tiffanie said she was proud of her daughter and her accomplishments and is glad she continued to strive to do better.

“There’s one thing I don’t have to worry about with her,” she said. “Aniiah always takes care of all the stuff that’s important in her life. I don’t have to push her. She always seemed to make sure she had everything taken care of. And that’s the good thing about her.

“She’s very dependable and all about succeeding and doing better. She strives for perfection all the time and I tell her, ‘It’s okay,’ but she still continues to be the best at everything she does. I’m proud of her.”

Tiffanie hopes to get to see her daughter play in college.

Aniiah got emotional as she spoke about what Coach Howell has meant to her.

“Tyler here has meant the world to me,” she said. “Growing up, I really didn’t have a steady father figure. When I met him it was just like, anything I needed, I can call him. He has been there through everything I’ve been through. I couldn’t thank him enough for everything that he has done for me.”

Coach Howell said he tries from the start to teach his players a little bit about basketball and also things that will help them be successful after high school and in life.

He said Aniiah’s “story and seeing her journey” to continue her education and play basketball, “it’s a fulfillment and I’m very proud of her and all of her accomplishments.

“And I’m always here if she needs me.”