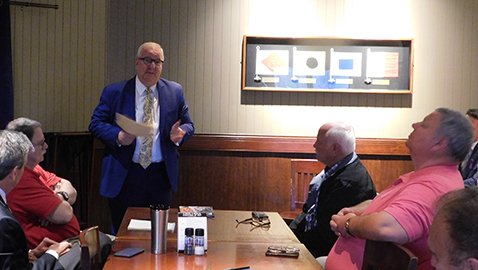 Armstrong, who said he’s been no stranger to long days at the office. His days begin early and end in the evening.

“I start early because I’m an early person. I usually show up about two hours before anyone else,” he said. “But if I didn’t get in early, I wouldn’t be able to get the things done that need to get done.”

Armstrong, who said he and his staff have saved Knox County taxpayers millions of dollars, commended the members of his staff for their hard work.

“I get ready to leave about 7 o’clock in the evening and many on my staff are still there working, and you feel guilty because you’re the boss and you’re leaving and the people who work for you are still working,” he said. “But I get to the office about two hours before anybody else does.

The law office has done some tremendous things since 2013. “We’ve upgraded the staff and we have some really top-notch litigators. I’d put my staff up against anybody.”

Under Armstrong’s leadership, the Knox County Law office has saved the county taxpayers millions because it has eliminated much of its hiring of outside counsel and has gotten many longstanding cases off the books, Armstrong said.

“Sometimes, you get grilled for settling cases,” he said. “But we had a really bad case that involved a bus wreck and children got killed.

“We settled that case because there’s no way you can win those kind of cases.”

He also noted that his office has collected a majority of delinquent county taxes largely without the help of outside counsel. The elimination of outside counsel has saved the tax payers $15-20 million, according to the law director. Before he took office, Armstrong said the Law Office spent close to $900,000 per year for outside counsel. Now, the office spends less than one-third of that annually.

Armstrong took the opportunity to shed light on his job description.

Armstrong said that he has saved taxpayer dollars due to the elimination of many false claims.