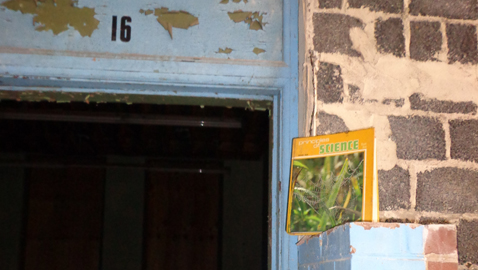 Old South High School is a landmark of South Knoxville. The skeleton of the huge brick structure sits next to the Sarah Simpson Professional Development and Technology Center which houses the Knox County Museum of Education.

On the walls of the museum are two glass cases with South High School mementos, jackets and letter sweaters. The school building next door has been vacant since 1991 and the last class to graduate there was in 1978.

Since being abandoned the school was sold by Knox County to a buyer who let the building deteriorate. The city council stepped up to rescue the structure, bought it for $190,000, declaring the structure “blighted” and then the city reinforced what parts of the building that could be saved. Councilman Nick Pavlis led the campaign to save the historic school.

A protective H-1 Historic overlay was placed on the remains of the building to protect it from being demolished.

Last year the city asked for ideas and developer Rick Dover offered to buy it with the idea of transforming it to senior living, much like Dover Development did with the once abandoned Oakwood Elementary School.

Tuesday morning Dover stood at the main entrance to the old building with Mayor Madeline Rogero, Pavlis, and Councilman Finbarr Saunders. He announced that although he hasn’t secured financial backing he has started to further secure the structure. Dover’s director of operations, Shea Ramsey, was already in the building and inspecting the facility as Dover thanked the mayor and the city council for saving the structure and accepting his offer to restore and repurpose it.

Dover told The Focus that the project may cost $9.5 million and that Barber McMurray, the same  architect company that designed the original building, has been hired to design the new senior living center. He said that when complete it will create 35 permanent jobs and include a memory care unit for Alzheimer’s patients.

Dover has his hands full in repairs and repurposing the old school but he told The Focus that another project, the repurposing of Old Knoxville High School, should be completed later this year. He’s also busy with renovating and restoring the Farragut Hotel and has purchased the Prior Brown Garage and the former State Supreme Court Building in Downtown Knoxville.

The building is eligible to be included on the National Register of Historic Places and Dover said he intended to pursue that designation.

“We think ultimately we’ll have 60 to 61 apartments here for seniors. It will be licensed for assisted living—we’ll have a Memory Care wing here. We have not yet got the final design so we don’t have the costing numbers yet,” he said.

“We decided the right thing to do is to go ahead and acquire the property, subject to the performance provisions we have with the city,” Dover said.

Councilman Pavlis said the restoration of South High School as a senior care facility is part of the “momentum we’re experiencing here in South Knoxville.”

“It’s a huge investment by Rick Dover and the Dover company. I appreciate so much them stepping forward and saving this building which is such an intergraded part of this community,” Pavlis said.

Mayor Madeline Rogero mentioned the efforts of Pavlis, the Community Development Department, the Public Service Department, and a city council that supports preservation.

“We have a council that really gets it and understands historic preservation, redevelopment, and investing in our city using public dollars so people like Rick Dover will come in and take the ultimate risk,” she said.

Following the ceremony Dover and Mayor Rogero conducted a tour of the old school for those who attended the event.