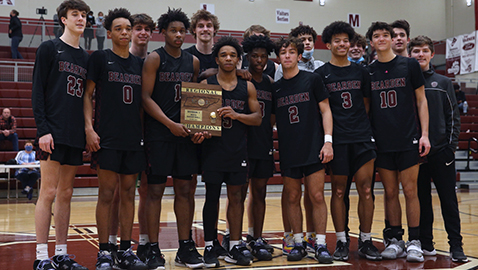 OAK RIDGE — As the clock hit triple-zero, a wild celebration ensued on Jill Prudden Court at Wildcat Arena as the Bearden High School student section stormed the floor to celebrate with the school’s boys basketball team.

It was a party to celebrate the Region 2-AAA Championship, a title that the Bulldogs had to earn with a 55-52 victory over Oak Ridge in a battle of district champions.

“This feels pretty dang good,” Bearden coach Jeremy Parrott said after the Bulldogs nearly squandered a 13-point lead. “We’ve won a state championship and we’re still the defending state champion, but after everything these guys have been through, and getting them through COVID, this feels pretty good.”

The other thing that had to make the coach happy was his squad’s defense — especially against the Wildcats’ 6-foot-7 post player Jonathan Milloway.

Milloway did manage to post a double-double as he scored 16 points and grabbed 10 rebounds. But half of his offensive production came over the game’s first eight minutes.

“The guys who had the defense on Milloway did a great job,” Parrott said. “Last year, he did a good job sending us home.

“That was how they got us last year. We felt like we didn’t contain the post last year. That was a priority for us tonight. Hayden Treadwell did a good job of pushing and balling with Milloway and Walker Kyle did too.”

Milloway had just six points after halftime and was all but stifled on the boards as he had just two rebounds after the break.

The Bulldogs took a 45-32 advantage into the fourth stanza.

Then, however, Bearden had to hang on to withstand a late surge from Oak Ridge, which trimmed the lead to 51-50 when senior guard Milloway knocked down a shot with 1 minute, 19 seconds remaining in the game.

Kyle made it 53-50 before the Wildcats’ Jeremy Miller converted a pair of free throws with 27.6 seconds to go.

Bearden’s Elijah Bredwood scored 25 points including a pair of foul shots with 13 seconds left to provide the game’s final margin.

Parrott said he knew that his team couldn’t relax with a big lead.

“We knew that they just weren’t just going to lie down and lose this game by double digits,” he said. “You knew that they were going to make a run because they’re good and they’re well-coached.”

In addition to scoring 25 points, Bredwood pulled down six rebounds and was named the region’s Most Valuable Player.

Johnathan Stewart scored 14 points for the Wildcats while Kell Slater finished with 12.

Both teams advance to tonight’s state sectional games. The Bulldogs will host Jefferson County while the Wildcats travel to Kingsport Dobyns-Bennett.

Tipoff for both games is slated for 7 p.m. and the winners will advance to the Class AAA State Tournament in Murfreesboro.