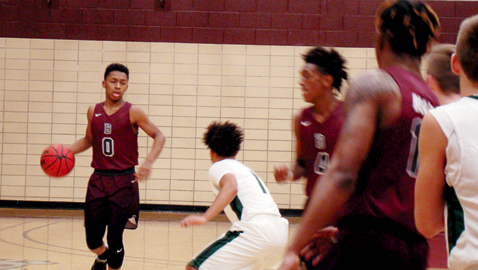 Jeremy Parrott knew that his Bearden High School boys basketball team would have a height advantage against Carter Wednesday night.

And Parrott, the Bulldogs’ first-year head coach, knew that if his squad was going to enjoy success against the Hornets, it would have to cash in inside.

“We knew coming in that we had a size advantage,” Parrott said after Bearden overcame a rough first quarter to down Carter 67-53 in the opening round of the Bearden Super 16 at Bearden High School. “They’re a very athletic team and coach [Andy] Hill is doing a great job with his guys over there.

“You know he’s doing a good job because he doesn’t have to coach effort. I had seen them on film and the one thing that stuck out was that they always played hard. We worked on getting the ball inside to our big guys.”

That work definitely paid dividends for Bearden (6-5) as Justin Ketterl scored 12 points and was a force on both the offensive glass and Kordell Kah scored seven of his 10 points after halftime.

“He got some big rebounds for us,” Parrott said of Ketterl. “And Kordell was big for us. Our post players are working hard and they’re getting better every day.

“You could tell that we hadn’t played in about two weeks but we were pleased to get this win and advance in this tournament. You can’t win a tournament if you don’t get the first one.”

The Bulldogs dug themselves an early hole as the Hornets opened a 17-12 lead by first quarter’s end. Parker Haun scored five of his 17 points in the opening frame for Carter (8-5). Adam Hurd, Ta’Michael Mims and Shawn Page each had four points in the period to help Carter open its early lead.

The Hornets held the upper hand until late in the second quarter Ketterl’s offensive rebound and subsequent bucket enabled Bearden to take a 31-29 lead with 32 seconds remaining until halftime.

After taking the lead, the Bulldogs never looked back.

Ketterl scored the final four points in the first half and his offensive punch provided the spark that Bearden needed. Bearden scored the first nine points of the second half and took a 40-29 lead when Dre’Jean Dave scored with 5 minutes, 8 seconds remaining in the frame.

The Bulldogs kept building their lead and held a 50-39 edge heading to the fourth quarter.

Haun led the Hornets with 17 points and buried four 3-pointers. Josh Lecroy scored 12 points and was a perfect 6-for-6 from the free throw line while Page finished with 11 points, including seven after halftime.

Tournament play continued through Friday but results were unavailable at press time.