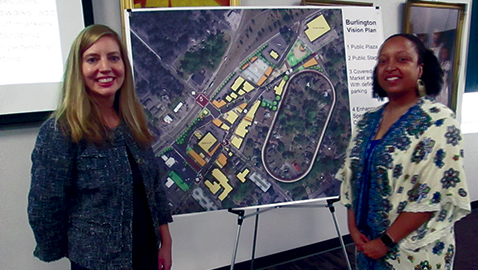 The future of East Knoxville’s Burlington neighborhood, once a thriving commercial center near the junction of Martin Luther King Jr. and Magnolia Avenue, is beginning to take shape.

“We went out into the community to make sure everyone was included in the survey,” Dr. Lundy said.

Fawaz reminded the audience that the suggested improvements in Burlington are not yet funded and that the survey was helped by a grant from the City’s Community Development Department. She said the neighborhood had suffered “from decades of neglect and suffers from vacant and run-down properties.

“Residents are ready,” she said for renovation there. About 150 people took part in the survey which asked what the current problems are and what residents would like to see eventually in their neighborhood.

Respondents brought up the need to rehab poor buildings and add landscaping, lighting and sidewalks. Suggestions on what might help the community included restaurants, theatres, and recreation facilities.

What was not wanted in Burlington were cash advance stores, night clubs and bars.

Other suggestions included historic markers along Speedway Circle, district markers on entering the neighborhood, and possibly ending MLK at the entrance to Magnolia Avenue.

Fawaz went through a slide show depicting suggested changes. She said the next step is to coordinate with businesses, churches, KUB TDOT, and look at zoning changes.

Funding of the future project could come from public and private partnerships, grants, state and federal funding and tax credits for business development.

Dawn Michelle Foster, director of community development, told the audience that the current city budget proposal designates $350,000 for Burlington and suggested that the presentation with the slide show be presented to Mayor Madeline Rogero. She also said that the nearby Magnolia Avenue Street Scape Project has a bidder and that contract will go before the City Council on May 22 with work possibly being started this summer.

At that meeting this Tuesday, the City Council authorized the mayor to contract with The Franklin Group in a $4.17 million agreement to begin the streetscape Project.

She also said that the city is seeking bids to sell the property at 1200 McCalla Avenue.

Dr. Lundy said, “I will fight hard” for the Burlington renovation, adding, “We want black, white and Hispanic involvement.”

Several local residents spoke on the future project, one expressing concern that residential rent rates might increase as the neighborhood improves.

The citizens also discussed difficulties in obtaining bank loans to purchase or improve property there.