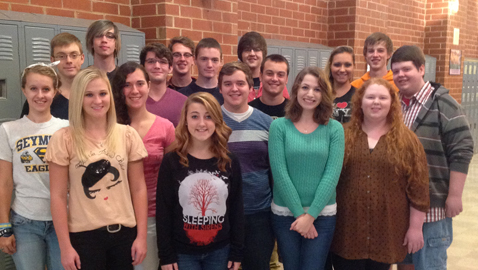 Summer is generally the season when most students enjoy time off from school activities, but it wasn’t the case for many Seymour High School choral students.  This past summer, Matt Gainey, Lydia Ogle, and Hannah Williams auditioned for and were accepted into the prestigious Tennessee Governor’s School for the Arts.  While in attendance for six weeks, these Seymour choral students earned college credit and had a chance to hone their artistic talents.  Equally busy were David McConnell and Ty Nease who were accepted into the Tennessee Ambassador’s Choir.  Both students traveled with other Tennessee choral students to Italy, England, France, Germany, Switzerland, and Lithuania.  While in these countries, they had the opportunity to perform with other choral students in some of the oldest cathedrals in the world to sold-out audiences.

Once the summer break was over for SHS Choral students, things only got busier.  They began the 2nd week of school with a concert for the Seymour Rotary Club.  This was followed the next week by a concert for the Tennessee Organization of School Superintendents at their recent banquet.  In attendance at the banquet was Governor Bill Haslam.  After the banquet, Governor Haslam left a crowd of people waiting to shake his hand so that he could join the choir on the concert stage.  While talking to the choir, Governor Haslam said that his children sang in the high school choir and that he knew a great choir when he heard one.  He said, “This is a great choir!  What a pleasure to hear them sing!  I’m very impressed with their work.”

As word has continued to spread regarding the excellence of the SHS Choir, they have been in constant demand to sing for various local events.  They were invited to sing at the recent Be Strong Hold On 5K race that raised money for area first responders and have also been invited to sing at the Toys for Tots fundraiser, Carson-Newman College Winter Concert, Seymour United Methodist Church, Greystone Presbyterian Church, and to perform the “Star Spangled Banner” for an Ice Bears hockey game.  In addition, Smoky Mountain Opry has put together a video of the choir singing Handel’s “Hallelujah Chorus” from Messiah that will be featured their upcoming production slated to open Nov. 1.