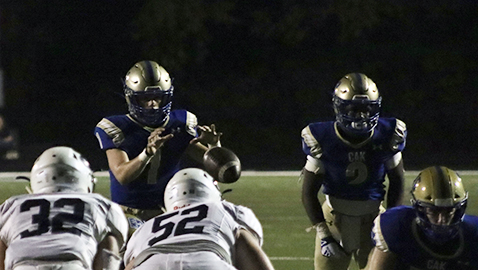 How does “Knox County’s only undefeated team” sound?

If CAK keeps winning, the prizes only get bigger.

Coach Travis Mozingo’s talented team (5-0 in region and 9-0 overall) will be playing for the Division II-AA East Region title and a perfect regular season this Friday night.

Next-door neighbor Webb School (4-1, 5-3) will be waiting and standing in the way. The underdog Spartans would like nothing better than to steal CAK’s thunder and claim the championship and No. 1 seed that goes with it.

“We’ve just got to play CAK football,” said Coach Mozingo. “(Webb coach) David Meske is a legend obviously and he’ll have his guys in the right spots. There are not going to be any cheap plays with him. We’ll have to play our best game to come out on top. I’m certain of that.”

CAK fans that follow the ball during the game saw the scintillating running of junior JD Dunn and a solid passing game triggered by senior Ryan Degges lead the Warriors’ latest victory.

Grace Christian Coach Rusty Bradley saw something else that contributed to the difference in the game. It was in the trenches.

Dunn, the Warriors’ Mr. Excitement, scored on a 43-yard scamper on his third touch of the contest and Thomas Simpson tossed a two-point pass to Lane Roberts to make it 8-0.

Dunn added a 21-yard touchdown run late in the second quarter and nailed down the win with TD runs of 5 and 22 yards within a half-minute of each other with a little over five minutes to go.

Degges ran one in from the 3 and hooked up with wide receiver Caleb Sparkman from 39 and 32 yards for two more TDs.

Ross Badgett misfired on a 43-yard field goal attempt in the first quarter but chipped in four PAT kicks.

“We were trying to put together four consecutive quarters,” said Mozingo, who is in his fifth season as head coach at CAK. “It was a bumpy first half, but the defense kept us in there.

“Grace is a good football team. They had only lost once coming into this game, so we knew we had to be able to put four good quarters together or it wasn’t going to end like we wanted. That was the challenge to our players all week.

“We’ve done it here and there, but this was the first night I felt like we did it from start to finish.”

GCA senior quarterback Cooper Riggs filled the air full of passes from start to finish, but it was Caleb Curcio’s 1-yard run and Art Knight’s extra-point kick that pulled the Rams within 8-7 in the closing seconds of the first quarter.

CAK opened up a 21-7 lead after an intercepton by Kanye Harris midway through the second quarter, but Riggs’ first TD pass to Gage Maynard cut the deficit to 21-14.

CAK extended its lead to 34-14, but the Warriors couldn’t capitalize on Chi McNeil-Harrison’s fifth pick of the season.

Late in the third quarter, Grant Warwick caught a pass from Riggs and streaked 43 yards down the sideline to make it a two-score game (34-21).

With 9:51 left, the Rams took over at their 20 and still had a chance, but lost seven yards on third down on a high snap and then a desperation fourth down pass was batted down by Noah Olsen.