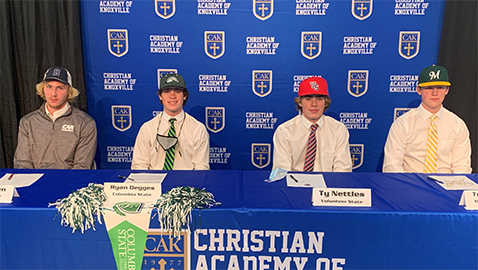 Degges, who also was the quarterback on CAK’s first 10-0 football team last season, lettered four years in baseball and two years in football.

Ryan also played on two state baseball championship teams, was a captain for two seasons on the football team and a member of the National Honor Society.

Nettles played four years on the Warriors’ baseball team and was a two-year starter. He also played on the two state title teams.

Olsen was a two-year starter and a 6-6, 218-pound TE-DE his senior season. He received post-season honors from 5-Star Preps and Knox News PrepXtra during his prep career.

In the Class A boys’ finals, Newport Grammar School defeated South Lawrence Middle 34-30 in overtime. Kyler Hayes led the Warriors with 19 points and Will Sutton added 10.

In other games, Alcoa’s boys, who eliminated Farragut in the state sectional round, was ousted in the Class AAA state semifinals, falling to Blackman Middle of Murfreesboro 40-31.

Alcoa led 24-16 after three quarters but was outscored 24-7 in the final six minutes as Blackman made 11 of 13 free throws.

Applications for nominees to the Class of 2021 Halls High Athletics’ Road to Fame will be put out on March 1 at the following locations: Phil Nichols State Farm office, Home Federal Bank in Halls, the TVA Credit Union office and Hallsdale / Powell Utility office.

Nominees must have been graduated from Halls High for five years to be eligible.

Each application should include a photograph and a resume of the nominee’s sports achievements in high school and beyond.

The applications will be available through April.

Members of the Road to Fame Board of Directors would like to encourage people in the Halls and Fountain City area, who are associated with former outstanding athletes at Halls High, to make it a point to fill out and turn in an application so the selection committee has a broader scope of athletes to select from.

The contract of TSSAA Executive Director Bernard Childress has been extended another three years. His current contract expires on June 30, 2021.

Central Athletic Director JD Lambert wants to publicly say ‘thank you’ to Gibbs High School and AD Jeff Thomas for making it possible for Central to play a basketball game against Clinton at Gibbs on Tuesday, Feb. 9, after a water line broke at Central High that afternoon.

“Being able to move our game to Gibbs made it possible for us to have school the next day and avoid having to play three straight nights of basketball,” said Lambert. “They (Gibbs) had everything set up and all we had to do was show up and play.

“I also appreciated the willingness of Clinton Athletic Director Brad Collette and Coach Chris Lockard to move the game to Gibbs.”