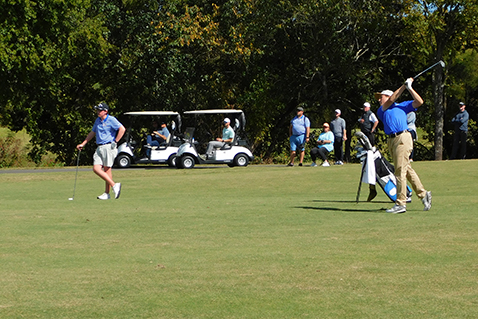 Cooper Russell came up a little short in a playoff for the individual title he was competing for in the TSSAA Division II Class A state golf tournament last week, but that didn’t take away the happiness he felt for his team’s championship.

The Christian Academy of Knoxville sophomore led the Warriors to their sixth straight championship and 10th in school history Tuesday on the picturesque River Course at the Sevierville Golf Club.

Russell turned in a 3-over-par 74-73-147 total over his 36 holes in the two-day event, which was held in Sevierville for the second year.

“I just went out there and played my game,” said Cooper when asked the key to his performance. “You know, take it one shot at a time.

“It was a really close battle at the end. I was one down going into our last hole and I birdied that to go into a playoff.”

After CAK had clinched the team crown by outscoring runner-up Battle Ground Academy 610 to 619, Russell and BGA senior Elliot Brashear had their playoff for top individual honors, starting on hole No. 1.

With teammates, family members and fans following their play out on the course, each golfer made a par on the first extra hole.

In deciding hole No. 2, Russell’s long birdie attempt across the green just missed. “It was pretty close,” he said.

His opponent made his birdie shot from 10 to 12 feet away.

Following the playoff, Russell and Brashear returned for the awards presentation outside the clubhouse.

It didn’t take long for Russell to focus and take delight in the team’s championship.

“Oh it’s great,” he said. “Really glad to win. We came in here with a decent amount of expectations and we fulfilled them.”

Without a senior on the team this season, CAK no doubt will be the favorite again in 2023.

When asked the key to the team title, Russell had a quick reply. “Honestly, the bond we have,” he said. “We are always competing with each other and we’re great friends. We all just played our game, we didn’t get ahead of ourselves and kept our emotions in check.”

Cooper acknowledged that the competition among teammates just makes the team better.

“We look forward to it,” he added.

The boys’ state team title was the third for Coach Donnie Cooper, who replaced CAK’s Hal Fennell after the 2019 season. Cooper had been the girls’ head coach and continues in that role now as well.

Fennell coached golf at CAK for 15 years and guided the Warriors to their first seven state crowns. He also started a tradition of celebrating each championship by jumping in a pond near the 18th hole at the WillowBrook Golf Club in Manchester when the TSSAA tournament was held there.

CAK players Kaleb Wilson and Jackson Hughey continued the tradition at WillowBrook in 2020.

Russell didn’t play for Fennell but had heard about the program’s past tradition.

“Right, I think we’re deciding to just let that die off and maybe start our own,” said Cooper.

First Baptist Academy, making its first appearance at the state, finished sixth with a 658 team total. The Eagles were led by junior Cooper Roberts (80-77-157) and freshman Lane Stokes (83-76-159).

Collin Keino, a Maryville Apostolic Christian Academy sophomore, participated as an individual and came in fourth place with a 75-74-149. Berean Christian School sophomore Landon Dyer placed 21st with an 83-78-161.

After being held in Manchester since 2010, Sevierville Golf Club was selected to host the state’s championships in 2021 and 2022 by the TSSAA Board of Control. The 36-hole facility at Sevierville allows for all of the state’s Division I and II tournaments to be held during the same week.

Providence Christian took the team title with a 290 total. CAK placed fifth with a 318.

Grady Thomas, an 8th grader at CAK, tied with teammate Isabella Coughlin, a freshman, with 36-hole totals of 159.