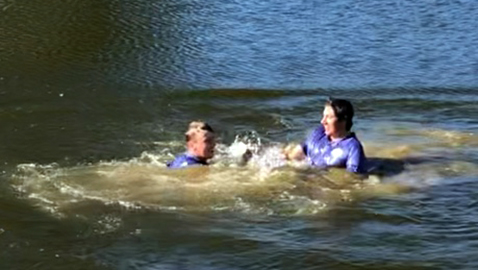 After leading Christian Academy of Knoxville to its fourth straight Division II-A boys’ state golf title and seventh overall last week, Kaleb Wilson and Jackson Hughey had something else to do.

They wanted to continue a longtime tradition of their former coach, Hank Fennell, who retired after last season.

Fennell coached boys’ golf at CAK for 15 years and had guided the Warriors to their first six state crowns, with the first coming in 2009 at the Old Fort Golf Course in Murfreesboro.

After the TSSAA made WillowBrook Golf Club in Manchester its state tourney site in 2010, Fennell started his tradition of celebrating state championships by jumping into the pond next to the 18th green.

So, with the school’s seventh title having been captured Tuesday, Wilson and Hughey headed to the pond to make another splash.

“Hank was an amazing coach for us the previous two years and Jackson and I felt like we needed to carry on his tradition, so that is why we jumped into the pond,” said Wilson.

The following day, Fennell, who has a realty business in Knoxville, was asked if he had heard about Kaleb and Jackson jumping in the pond.

“I did,” he said with a laugh. “The others should have too!”

Maybe next season, more will. Wilson and Hughey are juniors this year, along with Benjamin Johnston, another member of the team.

But first the Warriors will have to get to Manchester again and then they have to win.

Getting to make a splash in Hank’s pond doesn’t come easily, which makes it that much more worthwhile.