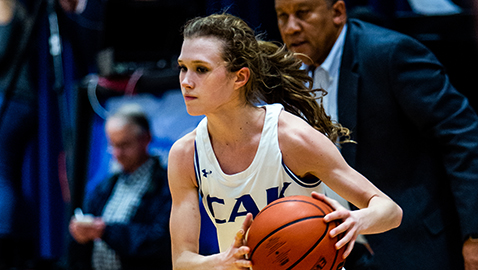 A stomach virus unfortunately limited Claire Brock’s playing time in the TSSAA Division II-A state girls’ basketball tournament in March, but Claire had shown what she could do on the court throughout the season and particularly in a sectional win over University School of Jackson.

Christian Academy of Knoxville’s 5-8 senior point guard, the school’s selection for female Student-Athlete of the Year, scored 31 points in the 62-59 overtime win over USJ, which propelled the Lady Warriors to their second-ever state tourney appearance. Her performance included two clutch free throws with 20 seconds to go that gave CAK a 3-point lead.

USJ Coach Tony Shutes was impressed with Brock and after the game said: “She’s a tough player. From the scouting report, we knew we had to try to make her work and we did. She’s just a good player. But they had other players to step up.”

With Brock ailing, teammates helped picked up the slack and CAK took runner-up honors at state. When Claire wasn’t playing, she was supporting her team from the bench.

Brock was a member of the CAK team for five years and finished with over 1,500 points – second most in school history. She averaged 19 points her senior year.

She was named the Co-MVP of District 1, MVP of the East Region All-Tournament team, a 5Star Preps first team selection and a PrepXtra Player of the Year finalist.

“Claire is a natural born leader in so many facets of life,” said Abby Williams, CAK Assistant Athletic Director and Head Girls Basketball Coach. “She leads through her character, her attitude, her actions and her spirituality. Her desire to work hard and be successful was instrumental in this season’s success. Emory University is lucky to be receiving such a strong willed student-athlete.”

Emory is located in Atlanta and is a NCAA Division III member.

In football, Simpson was a “first team” selection as a wide receiver on The Knoxville Focus / Coaches’ 2018 All-Knox County team, a four-year letterman and a two-year captain.

“Over the three years that I coached Luke, I watched him grow to become a better athlete, a better leader, and most importantly, a better Christian young man,” said CAK Head Football Coach Travis Mozingo.

“Luke has a level of dedication that is rare in team sports nowadays. I’m eager to see him flourish in the Carson-Newman University football program, as I am certain that his growth will continue into a future of influence in our community.”

Simpson also was a defensive back on the football team, as well as the punter the last eight games of the season.

He also was a lacrosse player and a captain in that sport, too, said Mozingo.