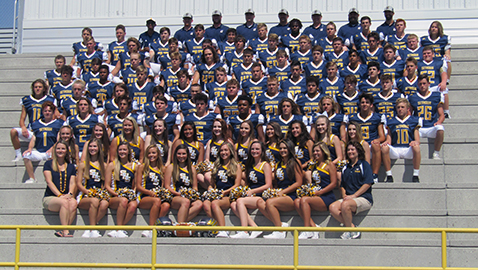 Seymour High’s 0-10 football record in 2017 was a little misleading.

The Eagles lost their first two games by identical 13-8 scores and were outscored by a total of only 25 points in their first four games. That’s just a tad over a touchdown per game.

In Week 9, a 0-7 Seymour squad travelled to Sevierville and gave the county rival Smoky Bears all they wanted before falling 9-7. That made five games decided by eight points or less.

Now the question is: Can Seymour grad and former UT and NFL player Scott Galyon turn those close losses into victories in his first head coaching job?

Seymour will be an experienced team this season, with nine starters returning on offense and eight on defense, although many players go both ways.

“We’re running a spread on offense,” said Galyon, who believes his personnel fit this system.

“We’ve got a quarterback who can pull the trigger well and is a good decision maker in Grayson Campbell (5-10, 170, junior). We’ve got some skill guys and speed on the outside. We don’t have a ton of depth, but I think we’re going to be good up front with our O-line.”

Even with the spread look, Galyon said: “The ball will still be going through our running back in Gabe Kitts (5-9, 200, junior). He’s one of our best players, so we’ve got to establish the run through him.”

Overall, Galyon hopes the Eagles’ attack will be entertaining.

“We’re going to try to spread the field out and have a little fun and throw the ball around.

“Defensively, I think the talent we have fits the 4-3 concept that we’re working with and teaching these guys,” added Galyon. “It’s what they were in last year, so they are familiar with it and have an idea of our calls and adjustments.”

The team’s strength is its depth in the skill positions.

“We have a good number of athletes, skill guys who can fill in and play a lot of different positions,” said Galyon.

Sophomore Nic Childress will back up Kitts in the running game. Campbell’s leading targets are expected to be wide receivers Cameron Dyer and Naaman Webb. Jeremiah Cataline will play significant time on both sides of the ball as a WR-DB.

“Those are talented skill guys,” said Galyon. “We’ve just got to get them playing hard and selling out for each other.”

Others who will get many reps behind them are J.D. Kandell, Mikey Nevins and Cy Ruth.

“On defense, unfortunately, will be a lot of the same guys,” said Galyon.

The D-line will include Kwasney and Mullins. Also getting some playing time will be Adam Quincy at DE, Bryan Rhoton at DT and Noah Spradlin at DE and LB.

Starting linebackers are expected to be Kitts and Jackson Lane on the outside. Dyer will play some LB, corner and the back end of the defense. Mikey Nevins, Angelo DeLucia and Childress will play some LB.

The secondary will include Webb, Cataline, Kandel, Ruth and Seth Shaw.

Will Zamboni is the placekicker and Kitts also will handle the punting duties.

“A challenge will be trying to steal snaps from guys like Kitts, Webb, Cataline and Dyer so they get a breather on Friday night,” emphasized Galyon, who said he watched last season’s opening game against David Crockett and counted 137 snaps.

“By this time, some guys have separated themselves as starters,” he added. “But we need some other guys that are selfless and willing to rotate in.”

The Eagles will play their season opener at Crockett High in Jonesborough Friday night.