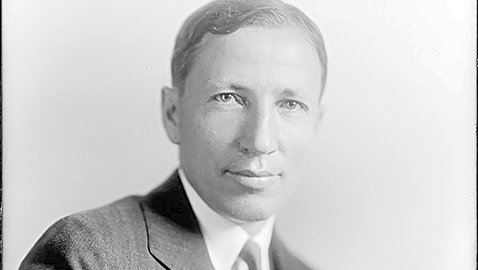 Congressman Sam R. Sells, a veteran of ten years in the U. S. House of Representatives, was being hard-pressed for the Republican nomination in 1920. Carroll Reece had been a farm boy who had fought with distinction during the First World War and taught economics at New York University. Sells, a cigar-smoking, bushy-headed forty-nine-year-old businessman, was thought to be well-entrenched inside Tennessee’s First Congressional District. Like many veterans before and after him, Carroll Reece had effectively leveraged a heroic war record into a formidable campaign for public office.

Sells was believed to have an effective political organization inside the First District, although Reece had cobbled together an organization of his own, comprised of fellow veterans and political opponents of the incumbent congressman. Women were also voting for the first time in Tennessee following the ratification of the Nineteenth Amendment to the Constitution. Originally, few people took the congressional candidacy of Carroll Reece seriously; indeed, the supporters of Sam R. Sells laughed off Reece’s candidacy as little more than a joke. The congressman’s supporters had stopped laughing and were working hard to reelect Sells.

Congressman Sells and Carroll Reece crossed verbal swords in Tazewell, Tennessee where five hundred citizens had gathered to hear the congressional candidates speak. Reece spoke first, speaking for an hour while Congressman Sells spoke for an hour and fifteen minutes. Reece was allowed an additional fifteen minutes for rebuttal. It was court day in Tazewell and had the air of a carnival with a lad selling lemonade from a washtub “cold as ice and sweet as honey.” “The Punch and Judy man with his joking mannikins” as well as “a patent medicine man” and an aviator from Kentucky helped to keep the interests of folks who had come to hear the candidates.

“I am not the candidate of Sells’ political enemies, as Mr. Sells has always charged,” Carroll Reece told his audience, “raising a war cry that his enemies are stabbing him in the back.” Reece claimed he was “not the candidate of any man or set of men.” Carroll Reece said he was “a mountain boy who claims that by his own efforts to have qualified for the office to which he seeks, and I am perfectly satisfied to leave my case for a decision of the people in the August primary.”

One nub of contention between the two candidates had been an interview between Sells and Reece in the congressman’s office. The Reece version of the story had Sells attempt to browbeat the young man, as well as treat him with profound rudeness and discourtesy. The version told by Sells was that the congressman had not summoned Carroll Reece, but rather had agreed to see him at the request of a mutual friend. The congressman insisted Reece had been treated with every courtesy. At the joint appearance in Tazewell, Reece gave his rendition of what at occurred at that meeting. Reece said once they were alone, the congressman had lit a cigar which he stuck in the corner of his mouth. “Then sticking his thumb in the armhole of his vest, and looking out from under his shaggy eyebrows he looked at me and said, ‘Reece, who are you?’”

Carroll Reece contended Sam Sells was primarily a businessman who devoted far less attention to his office than to his business interests. Reece insisted, “No man can do any work justice unless he takes a delight in performing the duties of his office.” “Now, if there is any good in this office,” Reece said, “it should be passed around; and if there is any bad in it, it oughtn’t to rest upon the shoulders of one man too long.” It was an attitude that would change once Reece became the incumbent congressman.

When it came to his turn to speak, Congressman Sam R. Sells denied he had been rude to Carroll Reece when the two had met. Sells pointed to the signed sworn statement of the gentleman who had brought Reece to the congressman’s office. The only dissatisfaction Reece could have had with the interview, the congressman snapped, was Sells’ refusal to abandon his office and the Republican nomination. Sells addressed the charges made by Carroll Reece he was an absentee congressman much of the time. “There have been many reasons why I have not answered every roll call,” Sells said, “and I want to say here that I have never known a representative in congress who was worth much to his people who made it a practice to respond to everyone, and I daresay that if Mr. Reece would make a close investigation he would find that 90 per cent of these roll calls were for the purpose of securing a quorum to listen to a frenzied oratorical effort in which I had not nor my constituency any hope of profit.” Sells attempted to throw his failure to respond to roll calls in the laps of his opponents, telling the audience, “The number of rolls to which I failed to respond would have greatly lessened had my enemies left me alone for a few brief intervals or pursued me with less vengeful hate.” Sells claimed most of the roll calls he had missed were during the four years Ben W. Hooper, a Republican, had been governor of Tennessee. Sells said his “repeated visits to Nashville to aid” Governor Hooper was the reason for many of the missed roll calls votes. The congressman said he had no apologies to make for having voted against the income tax, saying it had “laid its heavy hand on the millionaire, the manufacturer, the farmer, the clerk, the mechanic and in the long run has been borne by the consuming class of this country.” Sells accused Reece of being the “tool” of his political enemies in the district and said “his record as a soldier” was “his greatest, and in fact, his only asset for preferment.” Congressman Sells said Reece had never done anything on behalf of the Republican Party, nor did the records of Sullivan or Johnson counties indicate the young candidate had ever voted. “I am standing squarely on my record,” Sam Sells cried, “and not withstanding the slanderous attacks of my opponents, there is nothing in it that I am ashamed of, or for which I offer an apology.”

Republicans were enthused and Alfred A. Taylor, a former three-term congressman from the First District, was competing for the GOP nomination for governor. The day following the Republican primary, Congressman Sam R. Sells gave out a press release claiming victory. “I am nominated by a majority of from 200 to 300, with Claiborne county yet to hear from,” Sells said. “Claiborne will give me a majority of about 400, which will make my lead in the district about 600 to 700.” Sell insisted “there are absolute facts” irrespective of whatever the Reece campaign might say to the contrary. At the same time, Congressman Sam R. Sells was claiming victory, the Knoxville Sentinel carried a story headlined, “Sells Is Unwilling To Concede Race To Reece.” The congressman said he did not have access to complete returns from the counties comprising the First Congressional District and believed there were numerous “irregularities” in the election. Sells said he had seen a report some 2,100 Republicans had cast ballots in the GOP primary in Hawkins County, which had never before voted more than 1,700 in a Republican primary. Congressman Sells said the vote in Washington County was practically as many ballots cast as in a general election.

The Johnson City Staff published a report that according to its calculation of the votes cast in the Republican primary, Carroll Reece had won by 300 ballots. Dr. S. H. Thompson, one of Reece’s campaign managers in Bristol, believed the young candidate was leading Sells by 1,200 votes. The Kingsport Times carried a banner headline Reece had been nominated for Congress, saying Reece’s majority was 1,319 votes.

George C. Taylor, former secretary of Governor Ben W. Hooper, and the campaign manager for the Reece for Congress campaign, dismissed Sells’ claims of election irregularities, pointing out the congressman controlled the election machinery inside the First District. “It is indeed strange that Mr. Sells’ friends would rob him,” Taylor said. “Mr. Sells is defeated in the primary which he has absolutely controlled and should not now cry fraud.”

The Knoxville Journal and Tribune agreed Reece had won the GOP nomination by at least 500 votes. The Chattanooga Daily Times published an editorial stating, “The people appear to have taken a great fancy to overseas men in the primary balloting in the state…” The Daily Times noted the victory of Lieutenant Carroll Reece “who served his country faithfully, honorably and with distinguished bravery during the war with Germany” over incumbent Sam R. Sells. Nor did the Daily Times shortchange Sam R. Sells, noting he had long been one of the “bosses” of the Tennessee Republican Party and was “a strong man” as well as a “fighter of ability and experience.” Yet, the Daily Times noted Sells had a record “that savors too much of demagogy, hypocrisy and opportunism” which had evidently given “the young soldier the opportunity he was seeking” in challenging the congressman. The Daily Times compared Reece’s campaign to that of another veteran in West Tennessee, Gordon Browning. Like Reece, Browning was a veteran of the World War and was challenging an incumbent inside the Democratic primary. Thetus W. Sims had served in Congress from Tennessee’s Eighth Congressional District for twenty-four years. Sims had flirted with a bid for the U. S. Senate in 1915, but after announcing his candidacy, had withdrawn it about as quickly. Captain Browning had commanded Battery A of the 114th Field Artillery. The Daily Times reported Browning was straightforward in his approach to politics and issues. Browning had beaten Congressman Sims by a big margin, which ended Sims’s political career. Both Carroll Reece and Gordon Browning would be fixtures in Tennessee politics for decades to come.

Days after the election, Congressman Sells continued to insist he was a victim of fraud and refused to concede. Another manager of the Reece campaign, Sam R. Thompson, stated Reece had a large majority over the incumbent. According to Thompson, Sells had a scant majority of only 12 votes over Reece before the returns from Claiborne County had been received. Claiborne County had given Reece a majority of 1,093 votes.

“I have definitely made up my mind to contest this election,” Congressman Sam Sells said in an interview in Knoxville. “There is no element of doubt in my mind that I can show enough irregularities to overcome Reece’s reported majorities.” Congressman Sells added, “If I cannot show that I am the rightful nominee of the party, then I expect to support Lieut. Reece and do it heartily. I have been requested by hundreds of men to run as an independent, but I have refused to do so. I am either going to run as a legal and rightful nominee of the Republican party or not at all.”