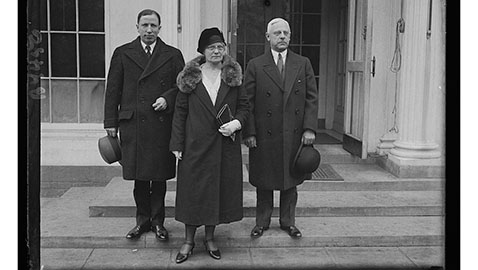 Carroll Reece, thirty years old and a veteran of the First World War, had defeated Congressman Sam R. Sells for the right to carry the Republican Party banner in the general election of 1920.  Sells had not taken his defeat lightly and had tried to challenge the election results without success.  1920 proved to be a good year for Republican candidates from the White House to the courthouse.  Woodrow Wilson, crippled from a major stroke, remained largely out of sight, and had in fact wanted a third nomination from his party to be the Democratic nominee in the 1920 presidential election.  Instead, Democrats nominated Governor James M. Cox of Ohio.  The Republicans had also nominated an Ohioan and a dark horse, Senator Warren G. Harding.  Stately and with a head of white hair, Warren Harding certainly looked the part of an American president.  Republicans in Tennessee had nominated Alf A. Taylor for governor.  “Uncle Alf” was making his third race for the governorship, once contesting with his brother Robert Love Taylor in 1886 in the famous “War of Roses.”  Bob and Alf Taylor had traveled the state together, speaking to the same audiences and oftentimes sharing the same bed at night.  Bob had said both he and his brother were roses, he a white one and Alf a red one.  The white rose became the symbol of Bob Taylor’s supporters, while Alf’s wore a red rose.

Alf Taylor had sensed 1910 might be a good year for Republicans in Tennessee and tried to win the GOP nomination for governor, but lost to Ben W. Hooper.  Seventy-one years old in 1920, Uncle Alf defeated Jesse Littleton, the mayor of Chattanooga, for the Republican nomination.  The Republican tidal wave had also carried Julian Campbell of Lebanon to statewide office, winning a seat on the Railroad and Utilities Commission.

Warren G. Harding carried Tennessee and once again, Uncle Alf’s political instincts had not failed him.  Taylor beat incumbent A. H. Roberts for governor, while Republicans won five of Tennessee’s ten seats in the U. S. House of Representatives.  Carroll Reece easily won the Republican First Congressional District, J. Will Taylor was reelected in the equally Republican Second Congressional District.  Congressman John A. Moon of Chattanooga was upset in the general election by GOP candidate Joseph E. Brown, whose father Foster had preceded Moon in Congress.  Likewise, Cordell Hull lost inside the highly Democratic Fourth Congressional District to Wynne F. Clouse.  Gordon Browning, who had defeated incumbent Thetus W. Sims inside the Democratic primary, lost to Republican Lon A. Scott.

Carroll Reece went to Washington where the GOP had claimed the White House and comprised a majority in both houses of Congress.  The Knoxville Journal and Tribune, in reporting Carroll Reece’s election to Congress, noted the young candidate’s educational accomplishments, pointing out he had earned the “degrees of Master of Arts, Bachelor of Arts, and a Doctor of Philosophy.”  The Journal and Tribune related Reece came from “pure American stock” and his grandfather, L. L. Maples, had once represented Carter and Johnson counties in the Tennessee General Assembly.  The Journal and Tribune also quoted for its readers a citation issued by General John J. Pershing, commander of the American Expeditionary Forces in Europe during the World War, which commended Reece for having “lead his company brilliantly in the attack upon St. Mihiel salient and during the operations of the 26th Division, north of Verdun.”  Pershing had also praised Reece for having reorganized his command following an especially bloody encounter after suffering “heavy casualties.”

When Carroll Reece was elected to office, newly elected members of Congress did not take the oath of office until March 4 following their election the previous November.  As Reece waited to assume his seat in the House, he announced he had selected his secretary (the equivalent today of a Chief of Staff).  James D. Jenkins of Elizabethton was, according to the Bristol Herald Courier, “prominent in political and business circles” and had “many friends in Bristol” and the surrounding area.  Jenkins was also active in the Baptist church.  In early January of 1921, Alf Taylor was inaugurated as governor of Tennessee, but Carroll Reece missed the festivities, being confined to his bed with “a severe cold.”  By early February, the thirty-one year old congressman-elect had recovered sufficiently to address the members of a local post of the American Legion in Kingsport.

Carroll Reece issued a statement announcing his departure from the First Congressional District to Washington, D. C. to attend the inauguration of Warren G. Harding as President of the United States.  Reece said he expected to remain in Washington for some time, as he would also be sworn in as a Member of Congress and would devote all his time and attention to serving the people of his district.

Reece arrived in Washington, D. C. the evening of February 25, 1921 and got a room at the Wardman Park Inn.  With the election of a Republican president, the party faithful were eagerly awaiting Harding to sweep out Democratic officeholders from federal positions and replace them with Republicans.  The Bristol Herald Courier reported as Reece left for the Capitol, Paul E. Devine, a prominent and politically active lawyer from Johnson City, was likely to be recommended to serve as the U. S. Attorney for East Tennessee.  Divine had served as the secretary to Congressman Walter P. Brownlow, who had been succeeded in office by Reece’s predecessor, Sam R. Sells.  In Divine’s obituary in 1935, the “Major” was given the credit as being the original “discoverer” and political sponsor of Carroll Reece.

The congressman-elect did not choose Divine, but instead recommended his campaign manager, George C. Taylor, to serve as U. S. Attorney for the Eastern District of Tennessee to replace W. T. Kennerly of Knoxville.  J. Will Taylor, congressman from Tennessee’s Second District, had first been elected to office in 1918, making him the senior Republican in the Volunteer State delegation.  Taylor presented the requested committee assignments of his four freshmen colleagues for consideration.  Carroll Reece had stated his preference to serve on the banking and currency or pensions committee.  Reece was urged by his colleagues to volunteer to serve on the Committee on Pensions, as it was of vital importance to many veterans.  At the time, there was no Social Security nor were there any pensions for having served in the military.  All pensions were granted through special acts approved by Congress.  Being a veteran, Reece was nudged by his Tennessee colleagues to serve on the Committee on Pensions to better assist deserving veterans.  Reece’s predecessor in Congress, Sam R. Sells, had been boomed for appointment as Commissioner of Pensions, in the Harding administration.  The former congressman never applied to serve as Commissioner of Pensions, but he was likely disappointed when President Harding nominated a veteran of the Grand Army of the Republic from the Civil War.  Sells had been Chairman of the Committee on Pensions in the House and was himself a veteran of the Spanish – American War.  Even before committee assignments were doled out to freshmen legislators and while many of his colleagues had returned home to Tennessee, Carroll Reece remained in Washington, attending to requests from veterans in his district for assistance with the War Risk Insurance Bureau.

Before returning to Tennessee following his taking the oath of office, Congressman Carroll Reece gave an interview stating his opposition to the repeal of the primary election law in Tennessee, which was being considered by the state legislature.  “I am opposed to such a movement,” Congressman Reece said, “and I hope that it will be killed.”  Reece recalled prior to primary elections, Tennessee had selected candidates through conventions, which had increased bitter factionalism in both political parties, inspired corruption, and all too often ignored the popular will of the people.  Reece reminded newsmen the primary election law had been pushed by “the best elements in the state” and the congressman said he believed primary elections had produced nominees of both parties in an orderly fashion and had been “satisfactory to the majority of the people.”  Reece said, “Now that the women have been given the franchise” to vote it was especially important to keep the primary election law as there was no other mechanism for women to participate “in the affairs of her party.”  Congressman Carroll Reece said eliminating the primary law would “throttle the voice of the people.”

Reece utilized his time in Washington, D. C. to getting his congressional office up and running, as well as to become acquainted with department and agency heads with whom he would interact.  Upon returning home to the First Congressional District, Reece listened to opinions from friends, neighbors and supporters on patronage recommendations for jobs in the Harding administration.  With five Republican congressmen, four of them freshmen legislators, and a GOP governor, it is hardly surprising they began fighting amongst themselves over positions and appointments.  Reece was promoting the candidacy of R. L. Burnette of Nashville, who aspired to be the Collector of Internal Revenue for Tennessee, while Wynne F. Clouse was moving heaven and earth to assist the candidacy of Oscar Allgood, who had managed his successful congressional campaign.  Congressman Clouse said the wishes of J. Will Taylor and Carroll Reece should not be given more weight than those of the three freshman legislators who had won Democratic districts the previous November.  Clouse said the support for Republicans in Democratic districts had provided much of the margin for President Harding’s own victory in Tennessee.  Claudius Huston, a Chattanooga industrialist, who at one time or another, headed the Transcontinental Oil Company, the Chattanooga Chamber of Commerce, the Chattanooga Manufacturing Association, and the Tennessee River Navigation Company, had raised significant funds for Republicans in Tennessee.  Huston was a manufacturer of furniture, saw mill machinery and had considerable interests in textile manufacturing and steel ware.  Huston had been backed by many Tennesseans to serve as Secretary of Commerce in President Harding’s Cabinet, a post that went to Herbert Hoover instead.  Huston was appointed Assistant Secretary of Commerce, which pleased Harding’s supporters in the Volunteer State.

In early April, it was announced Carroll Reece had been assigned to the House Committee on Roads.  The first bill introduced by Congressman Reece was to turn over custody of tens of thousands of “four-wheel trailers, trucks, motorcycles and bicycles” held by the War Department over to the various states.  Reece, who had intimate knowledge of the equipment used during the World War, proposed to release the machinery to the Department of Agriculture who would then, in turn, release it to the individual states.  A long list of vehicles and equipment had been provided Congressman Reece by the head of the War Materials Division of the War Department, many of which could be used for road work.  Many auto and equipment manufacturers opposed the Reece Bill because they feared it would impair sales.

Carroll Reece got some publicity when his office was looted.  Without the aid of the usual burglar’s tools, thieves evidently broke into Congressman Reese’s office and stole $50,000 in cash.  As the first member of the famed Rainbow Division to make it to Congress, Carroll Reece had been deeply interested in the Forty-Second Division’s carnival and exposition to be held at the Union Station plaza.  The “cash” had been printed to very closely resemble actual legal tender.  Unfortunately for the thieves, the other side of the bills were an advertisement for the carnival.

Congressman Reece also won the approval of his fellow veterans for recommending those who had served in the war for appointments.  Reece recommended the appointment of Everett Greer as postmaster of Newport, which won plaudits from the local American Legion.  Carroll Reece was off to a good start as the congressman from Tennessee’s First District.