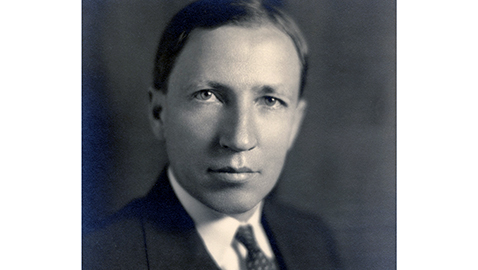 To get to Congress, Carroll Reece had to defeat an entrenched incumbent, who had served for a decade.  After taking the oath of office on March 4, 1921, Carroll Reece became one of the most enduring political figures in Tennessee’s political history.  Reece remains to this day one of the longest serving congressmen from the Volunteer State.

A congressman is usually the most vulnerable politically after his first term or after having served for a very long period of time.  While Carroll Reece worked hard to establish himself in Tennessee’s First Congressional District as the 1922 GOP primary loomed on the horizon, his predecessor, Sam R. Sells was, according to the Crossville Chronicle, “looking with longing eyes on the seat he lost to Reece through over-confidence of his own importance.”  Nor was former congressman Sam Sells reputedly the only person pondering running against Reece.  The Crossville Chronicle reported “a number of would-be-aspirants for Congress in the First District are sounding the waters to see if the tide is sufficient to float B. Carroll Reece, the young ex-service Congressman in his first term, out of Washington.”  The Knoxville Sentinel noted Carroll Reece and his secretary (Chief of Staff) James D. Jenkins of Elizabethton, had both been home during the Christmas holidays in 1921.  The congressman returned to Washington, D. C. after the New Year while his secretary followed him a few days later.  The Sentinel reported both of the “young men” were “very popular and have many admirers in this section.”  The Sentinel thought Reece was “especially popular, not only in his district but in Washington” where the young congressman “had been attentive to business in every way.”  The Sentinel article noted Reece had the “distinction of having put through more special bills than any other congressman, save one” and “has been eminently successful in getting compensation and pension claims passed upon favorably for his constituents.”  Readers should keep in mind at the time the Knoxville Sentinel was reporting Congressman Carroll Reece’s success in passing special pension and claims bills for individual constituents inside his district, there was no such thing as normal pensions for veterans, nor was there any Social Security.  People were dependent upon their congressmen to introduce such bills for them and Tennesseans were used to excellent constituent service.  Tennessee’s senior U. S. senator, Kenneth D. McKellar, remains to this day the Volunteer State’s longest-serving senator largely because of his insistence upon providing extraordinary service to his constituency.  Carroll Reece followed suit, establishing a pattern for fine constituent service later followed by his successor Jimmy Quillen as well as the Second District’s congressmen John and “Jimmy” Duncan.

The Sentinel related Congressman Reece and his secretary James Jenkins worked very hard on behalf of the people of the First District.  The Sentinel reporter thought Jenkins to be “a tireless worker, courteous to visitors and attentive to the duties of his office.”  The reporter believed it would be difficult to defeat Reece, noting the congressman had “not missed a roll call since his induction into office.”  Yet one of the realities of politics is no matter how excellent the service, an officeholder cannot please everyone.  By January of 1922, it appeared there would be no fewer than six candidates challenging Carroll Reece for the Republican nomination for Congress in Tennessee’s First District.  W. B. Ellison, the mayor of Johnson City, which was also Carroll Reece’s home city, was attempting to put together an organization to help him run for Congress.  Ellison was also the president of the Appalachian Baseball League, which made him known throughout much of East Tennessee.  Both former congressman Sam Sells and Judge D. A. Vines were contemplating a race for Congress while four others had already made their intent to run quite clear. Vines, according to the Knoxville Sentinel, possessed “a splendid record” as a circuit court judge, winning plaudits from supporters for his “stand against lawlessness and the illegal liquor traffic” which might make him a strong candidate for Congress.

Major Frank B. Robinson of Greeneville was already making the rounds as a candidate for Congress, while E. E. Creswell of Sevier County said he, too, was running for the GOP nomination.  The Nashville Banner reported a meeting of Republicans in the First District would convene in Johnson City, with delegates coming from every county in the congressional district.  It was apparently an effort to induce former congressman Sam R. Sells to become an avowed candidate to return to Congress.  Reece, when asked for a statement, all but yawned.  “I would judge the meeting is one hardly calculated to cause any alarm and I have nothing to add to the statement I issued last week,” the congressman replied.  The result of the Johnson City meeting was the opponents of Carroll Reece agreed to unite behind the candidacy of Sam R. Sells, if the former congressman would agree to run.  Sells made no immediate commitment, asking for time to think about it.  Yet there was an undercurrent of rumor hinting that Major Caleb Hathaway intended to seek the Republican nomination for Congress, which would cause Sam Sells to decide not to run.  Hathaway was from Elizabethton and like Carroll Reece, a veteran of the World War.  Hathaway had been severely wounded during the war and was thought to be widely popular inside the First Congressional District.

Johnson City Mayor William E. Ellison gave out a statement, saying, “If I go to Congress I would not be content to serve simply as a political representative of the district, but act for the benefit of the district and the country at large.”  Ellison explained he would answer the roll calls and “take part in matters brought up” while “certainly not” being “the tool of political leaders or party leaders.”  “I consider there is more to be done than simply answering letters, favoring local projects alone and patting my constituents on the back.”  Ellison and Frank Robinson of Sevier County were ultimately the only two candidates to have their names on the ballot against Congressman Carroll Reece.  Neither man carried his own home county against Reece.  In fact, Robinson was humiliated in Sevier County, winning a paltry 64 votes while Ellison claimed 759 and Reece won with 1,554 ballots.  Likewise, William Ellison had to be highly disappointed with his showing in Johnson County where he tallied a mere 191 votes to 2,138 for Carroll Reece.  The young congressman carried every county in the district, winning a total of 17,910 votes to 3,687 for William E. Ellison and 946 for Frank R. Robinson.  It was a vote of confidence from Reece’s fellow Republicans who apparently liked having their letters answered, as well as a congressman who fought for local projects and patted them on the back when he saw them.

The Kingsport Times ran a headline the day after the August primary election reading, “Reece Literally Sweeps District; Majority is 15,300.”  Johnson County was home to both Reece and William E. Ellison and the congressman carried it five-to-one.  Reece carried Johnson City, where William E. Ellison was mayor, by two-to-one.  An editorial in the Johnson City Chronicle stated, “The overwhelming majority accorded Congressman Carroll Reece in the primary held Thursday appears to be conclusive evidence that the people of the district approve of his stewardship.”  The Chronicle editorial detailed the difficulties a freshman legislator experienced during his or her first term, but concluded Carroll Reece, while not having completed his first term, had made “an excellent record in Congress.”

Republicans in Tennessee had fared exceptionally well in the 1920 election.  Warren G. Harding had carried Tennessee and two Republicans won statewide office that year; Alfred A. Taylor had been elected governor while Julian Campbell had been elected to the Railroad and Utilities Commission.  Republicans had also won five out of ten congressional seats.  1922 saw the pendulum swing back to favor the Democrats.  Governor Taylor was defeated for reelection by attorney Austin Peay.  Congressman Joe Brown of Chattanooga did not run again and his seat was won by Sam D. McReynolds, a Democrat.  Cordell Hull reclaimed his Fourth Congressional District from GOP Congressman Wynne F. Clouse and Representative Lon A. Scott was defeated by Gordon Browning in another rematch in Tennessee’s Eighth Congressional District.  J. Will Taylor, who had first been elected to Congress in 1918, had been reelected in Tennessee’s normally Republican Second Congressional District, but Carroll Reece won an even bigger victory in his own First District.  No Democrat had filed to run against Reece in 1922.  Congressman Reece won the general election over his  opponent, J. T. Fugate, 17.050 to 5,085; Fugate had run as an Independent.

Carroll Reece returned to Washington, D.C., in 1923 and that proved to be an eventful year for the congressman.  On October 30, 1923 he was married to Louise Despard Goff, daughter of Guy and Mari Louise Goff.  Louise Goff’s mother had died in 1905 and her father had remarried.  Louise and her stepmother had been in Paris for several weeks before returning to Washington, D. C. and their home on New Hampshire Avenue before the wedding.

Louise Despard Goff was no stranger to politics.  Her grandfather, Nathan Goff, had been U. S. Attorney for West Virginia and Secretary of the Navy.  Goff had run for Congress twice and lost and ran for governor of West Virginia in 1876 and 1888 and lost both times.  Nathan Goff finally made it to Congress in 1883, having won the 1882 election and served for three terms.  Goff was nominated by President Benjamin Harrison to serve on the U. S. Court of Appeals for the Fourth Circuit in 1892 and served until 1913 when he had been elected to the United States Senate from West Virginia.  Goff’s son, Guy, Louise Reece’s father, was elected to the U. S. Senate from West Virginia in 1924 and would serve a single six-year term.  The Goff family was quite wealthy, owning extensive properties and businesses in West Virginia.

Carroll Reece and Louise Goff were married at St. Thomas’ Episcopal Church in Washington, D. C.  According to the Madison, Wisconsin Capital Times, the Reece-Goff wedding was “a brilliant social affair.”  Following the wedding ceremony, presided over by the Reverend C. Edwin Smith, a reception was held at Rauscher’s, founded by Charles Rauscher.  Located at 1110 Connecticut Avenue, Rasucher’s was a premier caterer specializing in tantalizing confections.  A large ballroom upstairs was favored by Washingtonians for lavish formal dinners, dances and receptions.  So popular was Rauscher’s with Washington, D.C., society, it became known as “the Delmonico’s of Washington”, after the famous New York City eatery.  Rauscher’s had catered numerous affairs, including weddings at the White House and inaugural balls.  Among the choice viands supplied by Rauscher’s for such occasions were oysters in white wine sauce, a variety of Neapolitan biscuits, tongue in jelly, ham in jelly, mayonnaise of chicken and others.  The congressman’s sister Laura was one of the maids of honor while his brother L. L. Reece was best man.  The ushers included former congressman Lon Scott, U. S. Attorney George C. Taylor, and brother Joseph who was the Dean of Carson-Newman College.

The marriage of Carroll and Louise Goff Reece would endure until the congressman’s death in 1961.  Their union would produce one child, a daughter, named for her mother.  Louise Goff Reece would become not only her husband’s mate, but political partner.  Louise Reece frequently served as the congressman’s chauffeur, as Carroll Reece never drove.  Over the years, Congressman Carroll Reece personally knew more people inside his district than anyone else in the state.  Louise certainly knew everyone of significance in the First Congressional District.  When Carroll Reece died less than three months into a new term of office, it seemed only natural Louise would run and win the right to serve out the remainder of his final term of office.  Even after her husband’s death, Louise Goff Reece remained active in state and national GOP affairs.