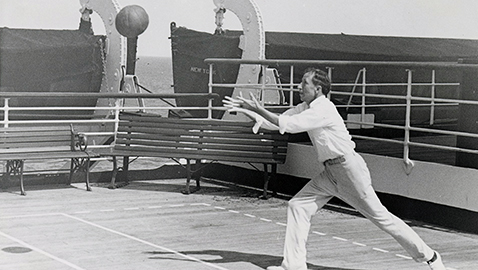 Carroll Reece, congressman from Tennessee’s First Congressional District, had served for a decade. Yet, in the 1930 general election, Reece found himself surprisingly hard pressed by the challenge of Oscar Byrd Lovette, the former District Attorney for four Tennessee counties that surround Lovette’s home of Greene County. Tennessee’s First Congressional District was profoundly Republican and the congressman was almost always decided inside the GOP primary, yet O. B. Lovette was running against Reece as an Independent in the general election. Lovette was hammering Reece for the congressman’s failure to support public power versus private power at Muscle Shoals, which was the forerunner of the Tennessee Valley Authority. Tennessee’s senior United States senator, Kenneth D. McKellar, was an outspoken and ferocious proponent of public power. McKellar was equally a relentless and determined enemy of the private power interests in the Nation’s Capitol. President Herbert Hoover was a proponent of private power and Congressman Carroll Reece had taken the side of the question advocated by the Chief Executive. Hoover had overwhelmingly carried the First Congressional District in 1928 and there was some reason to believe he remained popular there. Hoover had dispatched a letter on behalf of Reece to bolster the congressman’s reelection campaign during the primary. Carroll Reece had narrowly won renomination over Sam W. Price who had campaigned hard on the issue of support for Muscle Shoals.

Reece had built an impressive political network and organization throughout his congressional district, which rallied around the congressman and party nominee for the general election. One supporter, J. R. Gardner, went so far as to buy newspaper advertisements denouncing O. B. Lovette. “That a Republican of the standing and ability of General O. B. Lovette would allow himself to be drawn into the race is regrettable,” Gardner’s ad stated. “He enters the contest without credentials of any sort and in defiance of party regularity. He has been honored by the Republican organization in the past, yet he joins a movement to demoralize and destroy the Republican Party in the First Congressional District.” J. R. Gardner characterized O. B. Lovette’s campaign for Congress as less a fight against Carroll Reece than the Republican Party.

The Chattanooga News published an editorial shortly before the general election assuring readers O. B. Lovette had a chance to beat Carroll Reece. Noting Lovette had the combined support of Republicans as well as Democrats, the News reminded readers Lovette was waging his campaign on the issues of building the Cove Creek Dam and government operation of Muscle Shoals. It was Carroll Reece, the News asserted, “whose vote in Congress snatched the vision of Cove Creek Dam away from the people of East Tennessee.” “A victory for the latter [Lovette], we believe, would have a salutary effect in causing Southern congressmen to consider the rights of the people above those of private interests,” the editorial concluded.

The Bristol Herald Courier carried a column attributed to “Old Timer” which opined on a variety of topics, not the least of which was politics and political campaigns. “Old Timer” published a column before the November general election stating the congressional race was “so lopsided that it is ridiculous.” “Old Timer” ridiculed Oscar Fair, the regular Democratic nominee, writing, “The Hon. Oscar Fair, Democrat, when last heard from was soaring from peak to peak, from crag to crag, and so far, with the wrongs and insults of the people vexing his perturbed soul, has not as yet returned to earth and announced whether he will endure present evils or fly to ills he knows not of.” Nor did “Old Timer” spare William Isaac Giles, another Independent candidate. “The erratic Giles, William Isaac, will try and negotiate the race, but the infirmities of years and the love of conversation will cause him to tarry by the wayside.” “Old Timer” then came to his main target, O. B. Lovette. “General Lovette, Republican, an Independent candidate, is on the stump, making addresses. Whether the mantle discarded by Price, who opposed Reece in the primary, fell on his shoulders remains to be seen, but so far he has not complained. The forces of Carroll Reece, regular Republican nominee, are confident, and indeed they have a right to feel confident over the result. It is probable that William Isaac Giles, the eccentric, will run Gen. Lovette a dead heat.” As entertaining as “Old Timer’s” column was, he was dead wrong.

As the general election campaign came to a close, Carroll Reece spoke in Johnson City, while O. B. Lovette ended a motorcade tour in his own home city of Greeneville. The next morning, November 5, 1930, the Nashville Tennessean announced, “Carroll Reece Defeated for Congress Seat.” The Tennessean pointed out it had been 52 years since a Republican nominee for Congress had lost inside the First Congressional District. Lovette polled 20,893 votes to 18,239 for Reece. Of the 12 counties comprising the First Congressional District, Congressman Reece carried only four: Carter , Hancock, Johnson, and Unicoi. O. B. Lovette won everything else. Carroll Reece lost by 2654 votes.

Reece may well have also been hampered in his reelection campaign by the constant bad publicity given the case of his brother, Joseph, one of two Reece siblings who professed their preference for the Democratic Party. Joseph Reece had been appointed Commissioner of Insurance under Governor Henry Horton and was embroiled in a messy financial scandal, which eventually enmeshed yet another Reece brother. Certainly, the publicity surrounding Joseph did Carroll Reece no good.

Congressman Reece acknowledged his defeat on Thursday, November 6, 1930. Reece offered his congratulations to O. B. Lovette. Carroll Reece’s statement was considerably more than a cursory acknowledgment of defeat and a proffered token snippet of congratulations. It was a mixture of polite, albeit a bit on the icy side, acknowledgment and an illustration of what the congressman saw as the differences between himself and his political opponents. Nor was it the statement of one who was done with politics. Quite the contrary.

“A man who cannot accept defeat graciously is not entitled to victory,” Reece said in his statement. “It happens, however, during my six successful victories in the primary elections that no defeated opponent has extended congratulations or a word of acknowledgment, including the one who has apparently emerged victorious as an independent candidate after having been defeated in the Republican primary four years ago.”

Congressman Reece said he was glad he had “been sustained by my own party in our primary” and believed “my apparent defeat was brought about by a comparatively few bolting republicans having joined hands with the democratic party, in its effort to embarrass the present administration.” Reece also believed heavy snowfalls in the “upper end of the district kept thousands of loyal republicans away from the polls,” many of whom likely believed the congressman was sure to be reelected. Carroll Reece, having analyzed the election returns, noted “the democrats who are the strongest in the urban districts voted rather solidly for the independent candidate.” Reece stressed his own commitment to the Republican Party, saying he did not “feel that the time has come for the disorganization of the republican party by independent candidates.” Carroll Reece said “differences” inside the Republican Party should be settled inside GOP primaries.

Reece reminded voters, “I am interested in the first district, I love its people and shall never forget my friends to whom I am most profoundly grateful for having stood by me so loyally.” If anyone doubted Carroll Reece had his eye upon the future, the statement, “I hope to always be able to be with them and render them every service possible” should have served as a mighty big giveaway.

It could hardly surprise anyone that Carroll Reece would try and reclaim his seat in Congress in the 1932 election. There was very good reason to believe Reece’s defeat was but a temporary setback. The former congressman knew his successor would have only two years to ingratiate himself with the people of the First Congressional District, while Reece had performed countless services and favors for constituents for more than a decade. Reece also knew the administration of President Herbert Hoover would ignore Congressman O. B. Lovette in matters of Republican patronage. Carroll Reece proved that point and it was amply demonstrated the former congressman still wielded considerable influence inside the Hoover administration when the Knoxville Journal announced, “Reece Gets Job for Lowe as Agent in the Labor Department” in May of 1931.

The Journal reported the former congressman had returned from a trip to Washington, D. C. to his home in Johnson City. Reece had gone to the Capitol and spent the day visiting “governmental departments and calling on old friends.” One result of his trip to Washington was the appointment of L. Bert Lowe, a resident of Elizabethton, as an agent for the Department of Labor. Lowe was to be engaged in “unemployment work,” earning a salary of $3,000 annually. Bert Lowe was the nephew of John Lowe of Erwin, Tennessee, who was the head of the local chapter of the Brotherhood of Locomotive Engineers. Reece was quoted as saying, after his visit to Washington and discussions with “departmental officials,” he believed “the federal buildings at Elizabethton, Rogersville and Soldiers Home, Johnson City, to be started at an early date.” The Journal reminded readers the projects had been approved, along with the necessary appropriations, by the previous Congress. As a congressman, Carroll Reece, had pushed along appropriations of $650,000 for the Soldier’s Home in Johnson City, along with $125,000 for the post office building in Elizabethton, and $75,000 for the post office building in Rogersville. It was also a none-too-subtle reminder Congressman O. B. Lovette could not shower the First District with federal largesse as the Great Depression deepened and took hold in East Tennessee.

Both Carroll Reece and Congressman O. B. Lovette were suspected of aiding beleaguered Governor Henry Horton when Tennessee’s Chief Executive was doing his best to outswim the shark of impeachment close on his heels. The Chattanooga Daily Times reported, “The alliance between the Horton-Lea-Caldwell political machine and J. Will Taylor republicans today showed its color in the impeachment vote in the house of representatives.” A similar alliance with the Crump machine in Memphis negotiated by Luke Lea had dissolved when almost $7 million of taxpayer money evaporated with the collapse of the financial house of cards engineered by Rogers Caldwell. Crump and the Shelby County legislative delegation came after Governor Henry Horton with everything they had, which was considerable.

Will Taylor, the congressman from Tennessee’s Second Congressional District, reputedly did not want to see the GOP expand much beyond East Tennessee, as he enjoyed the power he had in patronage matters. With Carroll Reece absent from Congress, that power only grew. The Chattanooga Daily Times thought both Reece and his successor in Congress had helped Governor Horton to escape impeachment when the first vote failed by a mere seven votes. There were sixteen Republicans in the Tennessee House of Representatives and only four voted for the articles of impeachment. The four Republicans who voted for the articles of impeachment were Arthur Atchley of Knox County, M. G. Goodwin of Loudon County, Tom Taylor of McMinn County, and H. C. Franks from Hardin County in West Tennessee. Atchley was almost certainly following the will of the people he represented as few counties in Tennessee were harder hit by the fall of the House of Caldwell than Knox.

The Chattanooga Daily News related Horton had been helped by Carroll Reece, Congressman O. B. Lovette and Congressman E. E. Eslick, a Democrat who represented a district comprised of counties from Middle and West Tennessee. E. H. Crump was also then serving as a congressman from Shelby and few surrounding counties.

Carroll Reece was surely pondering his next campaign.