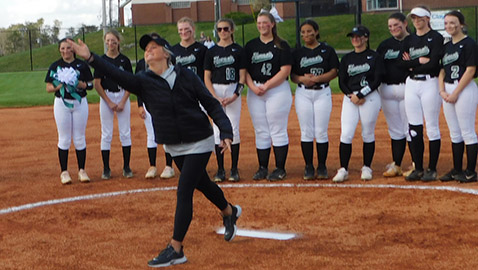 After 40 years without a true home, the Carter High School softball team has a place to call its own.

The field, which is located a short distance from campus at Carter Youth Sports Parks, was dedicated Thursday afternoon before the Lady Hornets lost, 11-0, to Cocke County.

The newly renovated facility is dedicated to fallen Knox County Sheriff’s Deputy Tim Laycock and to the late John Howell Clift, an educator and coach at the school.

The field features LED lighting, new dugouts, new fencing and a new scoreboard in left field. It was officially opened with a ribbon-cutting by the Carter senior softball players. Danielle Laycock, Tim’s widow, then threw out the ceremonial first pitch before the game.

Lady Hornets’ coach Ryan Burkhart said the facility, which was nearly a decade in the making is a special place.

“We’ve been working on this for eight years, since I got here,” he said. “It’s been overwhelming but it’s special and exciting for these kids.

“I’m a graduate of Carter High so this is a special day.”

The Lady Hornets previously played their home games at Holston-Chilhowee Park and on a field at Carter Youth Sports Park.

Burkhart said he was grateful for the community support during the renovation of the facility.

“Our community really came together,” he said.

Carter principal Angie Messer was excited to see the Lady Hornets play at their new home.

“This is a special day and a joy,” Messer said. “I would like to thank Knox County School and Parks and recreation for coming together and helping us make this happen.”