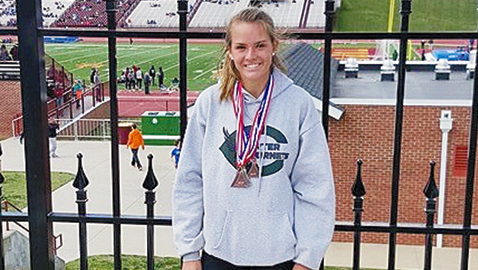 Shelby Reynolds missed most of last season in track and field because of foot surgery, but the Carter High senior is back in top form and busier than ever this spring.

Because of her versatility, she has added the pentathlon to her schedule and training as well.

Derek Witt, Carter assistant track and field coach, has been working closely with Reynolds, who has the top triple jump mark in the Knoxville area this season, with a leap of 34 feet, 8 inches.

“I’ve had the pleasure of working with Shelby for the last year and a half,” said Witt via e-mail last week. “She has been a track athlete for most of her life and she did compete at the end of the season last year. She had to have surgery on her foot that took her out of most of her junior track season.

“I introduced Shelby to the weight room,” added Witt, “and she has made some impressive gains in that area as well as the track.”

In addition to her triple jump mark, Reynolds has the top times and marks in District 3 A-AA this season in the 100, 200, 400, 800, 100 hurdles and 300 hurdles, as well as the high jump, long jump and shot put, according to Tennessee Runner Mile Split Outdoor Rankings, as of April 14.

Coach Witt said Reynolds competed in her first pentathlon this past winter during indoor season at the Galleria Games at the Crossplex in Birmingham, Ala., and placed third.

“She will be competing in this year’s outdoor pentathlon and has worked extremely hard to prepare herself.”

The Class A-AA Sectional pentathlon, which will be held April 25 in Greeneville, consists of competition in the 100-meter hurdles, long jump, shot put, high jump and 800 run.

“Shelby does plan on competing in college and she has several offers,” said Witt.

Rebecca Story, a sophomore at Christian Academy of Knoxville, set a new state record time of 10 minutes, 16.72 seconds in the girls’ 3200-meter run April 9 as she competed in the Arcadia Invitational in California. Story placed fourth in the race, which included many of the nation’s top prep distance runners.

In addition to Story, West High’s Nicole Adams (800) and Megan Murray (1600) are leaders in the girls’ distance races and their talents will be on display in the annual KIL meet, which is scheduled for May 2 and May 4 at Hardin Valley Academy.

Catholic’s Camille Mancini and HVA’s Lizzie Davis are the leaders in the 100 and 300 hurdles, respectively. Davis, a sophomore, also owns the best mark in the high jump.

In other field events, two freshmen – Caroline Lewis of West and Brittany Bishop of Anderson County – are the pacesetters in the long jump and pole vault, respectively.

Farragut’s Destiny Carey owns the best mark in the shot put and Anderson County’s Madison McCoy is the leader in the discus.