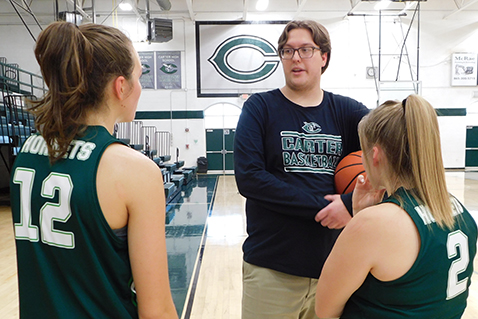 “I want to thank the administration at Carter High School for believing in me and my abilities to turn this program around,” said the 22-year-old McNew, who has taken over the Lady Hornets’ basketball program.

A 2018 graduate of Carter, McNew was offered the position by Athletic Director Jewel Brock last May after he received his Special Ed degree at Carson-Newman University. He filled the vacancy left by Bo Lewis, who took the Jefferson County girls’ head job after last season.

Parker played basketball, football and soccer at Carter and earned All-District, All-Region and All-State honors as a 6-foot-5 goalkeeper in soccer.

He started coaching basketball right out of high school and for three seasons he coached middle school girls under Dante Turnipseed at The King’s Academy, where they won a KISL championship. Turnipseed is the new girls head coach at TKA this season.

Parker got his first experience coaching high school players last year as an assistant coach for the Carter varsity girls and boys teams.

“In my short career, I believe my career highlight would be getting the opportunity to coach at my alma mater,” he said. “Carter and its community is really a family. Carter has a special place in my heart.”

McNew said he hopes to eventually bring back the excitement that the Carter girls program experienced two years ago when the Lady Hornets advanced to the Sub-State.

In addition to getting the program turned around, he said another goal is “to get one percent better every day.”

McNew, who is assisted by Todd Pait and Ashlyn Sullivan, is one of eight new girls head coaches in Knox County this season. The others are Lebrandon Marie at Central, Freeman Pinkney at Fulton, Summer Dalton at West, Lauren Trent at Karns, Kendall McGill at Gibbs, Ginger Harness at Concord Christian and Morgan Jones at First Baptist Academy.

The new coaches were requested by The Focus to submit brief background information and a career highlight.

Central’s Coach Marie has previously been a head coach on the boys’ side at Berean Christian and Sweetwater.

Marie, who played at Karns High and Knoxville College, started out as an assistant coach at Shorter University and Virgina Intermont College and since then has been an assistant at West, Karns, Anderson County, South-Doyle and Loudon high schools.

Pinkney previously was head coach at Catholic and FBA. He played at Kenwood High in Clarksville and Walters State Community College, UT Southern and Bethel University.

“A career highlight for me,” said Freeman, “would be during the 2020-2021 FBA season when the program beat Webb, CAK and Grace for the first time in school history.”

West High is the first head coaching job for Dalton. Previously, she was an assistant coach at Savannah State University and then at Austin-East.

Summer played high school ball at Farragut. In college, she played first at Charleston Southern, but then transferred her sophomore year to Maryville College and finished there.

Karns High is Trent’s first head coaching position after spending the last seven seasons as an assistant at Oak Ridge under Paige Taylor.

“We won seven straight district tournaments, three region titles and had three trips to the state tournament during that stretch,” she noted.

Lauren graduated from Hardin Valley in 2011 after attending Karns her freshman season. She then played four years at Maryville College.

Trent said her “player career highlight” was making it to the NCAA tournament all four seasons. As for her coaching highlight, “I have had so many good ones, but I will choose one of my favorite memories – Jada Guinn hitting a buzzer beater 3 to win us the region championship at Oak Ridge in 2018.”

FBA Athletic Director Darin Mercer said: “We are in a big rebuilding year and our new high school girls coach is actually leading our middle school into next year’s high school squad. We don’t have a girls high school team this year.”

TIME TO START: After last week’s Hall of Champions Games, the TSSAA’s first contest date for basketball is today.