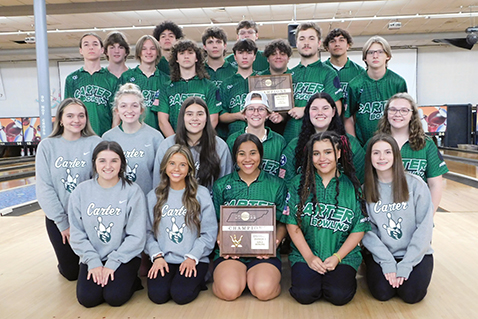 Carter brought the broom to the District 3 high school bowling tournament last week and swept the boys’ and girls’ team championships for the first time in program history.

For the Lady Hornets, it was the third straight year they had taken top honors, while it was the Hornets’ first-ever title.

Carter’s boys team, which included two seniors and 11 sophomores and freshmen, defeated Karns 17-6 in the finals at the Oak Ridge Bowling Center to raise its season record to 18-1.

The Hornets started with an 18-5 quarterfinal win over Bearden and toppled L&N STEM Academy 19-4 in the semifinals. In the other boys’ semifinal match, Karns defeated Oak Ridge.

The top two teams will advance to the Region 2 tournament at Pigeon Forge when school resumes after the holidays.

Coach Ray Wynn gathered his boys and girls teams together after the competition to tell them how excited he was and what a big moment it was for both teams to win the district tourney.

Carter started its bowling program four years ago in 2019. Both of its teams lost close games and were eliminated in the district semifinals that first year.

In fact, the Carter girls were ousted that first season on a tie-breaker as they had three pins less than L&N in the three-game total pin fall. But since then, the Lady Hornets have three-peated!

After claiming the district title, Coach Wynn talked about what it’s been like to keep his girls motivated.

“The girls bowl really well every single game, so keeping them motivated to get better every single time – that’s just been our goal,” he said.

Wynn is very proud of his young boys team.

“Those kids come every day and put in so much work,” he said. “They’ve improved so much from the beginning in August when we started until now, it’s quite remarkable.”

Nick Johnson and Blake Thornhill are the team’s senior leaders. Both started bowling at Carter when they were freshmen.

“We have so many that are in their first year, so me and Blake and Coach Ray just put our heads together and teach these boys up,” said Nick. “And they came out and showed us and got No. 1.”

Thornhill added: “It (the sweep) is really nice to do it our senior year. Last year in the district we got second place to L&N. So it’s just nice to come out here my senior year and get the win.”

Hallie Lane and Belle Gibson are the seniors on the girls’ team. Lane started bowling her sophomore year and Gibson last year as a junior.

Hallie said the key to the district title win was “just to keep each other up and encourage each other and don’t let anybody get down.”

Gibson said the team’s goal is “to make it to state. That’s been our goal the whole year.”

In the first game of each match, six players each bowl the traditional 10 frames. The Baker format is used the following five games, with five players bowling two frames each.

In addition to Carter’s win over Bearden, other boys’ quarterfinals results were L&N over Hardin Valley, Oak Ridge over Career Magnet and Karns over Gibbs.