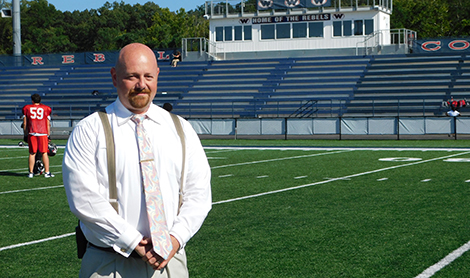 West High School may have a new athletic director in Chris Caruthers, but he has been around the business for more than a decade.

“Goal No. 1 for any athletic director has got to be to protect the integrity of the program,” said Caruthers recently.

Helping West High “keep a good face” will mean following the regulations that are provided and doing the right thing, added Caruthers. When such happens, he believes a school ends up with a program that athletes want to play for and supporters want to donate to.

“And to say that is not to say that it hasn’t been a program with integrity, because it has been,” emphasized Caruthers, who was a teacher at West from 1996 to 2006 before going into administration.

This summer, longtime West assistant principal and AD Steve Killian became an administrator at Farragut High and Caruthers was appointed to the West post the first week of July.

“The second week of July, I hit the ground running,” said Caruthers, who the previous nine years had been at Austin-East, where he assisted AD Alvin Armstead. He also had assisted Principal Ken Dunlap three years prior to that at Powell.

Caruthers said his No. 2 goal is learning all he can about being an athletic director.

“That means learning all the ins and outs of the TSSAA,” he said.

Much of an AD’s job he said has to do with entering eligibility for each athlete on the TSSAA portal, transfers and things behind the scenes that require a lot of attention.

“Those kinds of things are where you can get in a lot of trouble if you’re not careful,” added Caruthers, who pointed out he has been assisted by several athletic directors in the Knox County Schools’ system in the early going of his new job, including Dunlap (AD at Karns), Jody Wright (AD at Fulton), Armstead and Killian.

“These guys have helped me. When I have a question, I can give them a call. And I’ll also say the officials at TSSAA have been extraordinarily helpful.”

Killian had been at West a long time and had a “great reputation” in the West High community, said Caruthers, whose new post includes being 12th grade administrator.

“Steve had done a lot of good things for West High the last 10 to 12 years. My goal is for folks not to feel that loss too much.”

Caruthers said his approach has been “to be open, take as much suggestion as possible, but also to listen to the veterans and to Steve.”

Caruthers said he also has found the West High Athletic Council to be a strong support group.

Caruthers’ third objective has to do with the school’s facilities.

“West has access to some great facilities,” he said. “I’d love to see those things get upgraded and I think we’re working on that.”

West’s artificial turf was installed this summer and its football stadium has been getting spruced up. Its track also is getting a new surface.

Since he has joined the West staff, where Ashley Jessie is principal, Caruthers said the school has hired Brent Smith as head coach for boys’ and girls’ track and field and Mark Boyce as assistant coach in softball. The head job in softball is currently vacant but steps have been taken to fill the post.

Caruthers, who played prep football and graduated from Cumberland County High in 1990, was an assistant coach on Bill Wilson’s football staff at West for three years.

Chris and wife Tonia have two daughters, Tara and Regan, who are UT students.