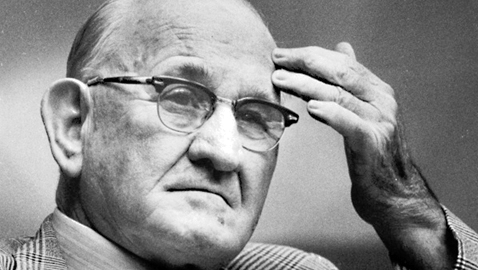 But for local fame no one outshines the late grocery tycoon, TV personality and local political boss, Cas Walker. Some of the other personalities crossed paths with Walker, including Dolly Parton, Ernie Ford and the Everly Brothers.

Cas Walker was a force of nature. Love him or hate him the imprint that Mr. Walker left on Knox County and East Tennessee marked all of us older citizens whether we ever saw or talked to the man, shopped at his many grocery stores, listened to him on radio, watched him on TV or faced him in politics.

Walker spoke his mind publically and cared little about what you thought of his opinion. Even though some said he was difficult to work with, Dolly Parton saw fit to have a building constructed to honor him at Dollywood. She first appeared on Walker’s “Farm and Home” hour at 9 years old.

I may have mentioned in a past story that I had a chance to interview Mr. Walker years ago when he opened a store back in the 1970s, in Rogersville, Tn. It was a modern facility right on one of the primary streets leading into the Hawkins County seat. He greeted me at the door and give me a tour, explaining why certain goods are placed where in the store. Having seen him on television as a child I was impressed by the aging businessman’s knowledge of his shoppers, what they wanted, and how to sell them things they may not have even wanted.

The Cas Walker stores were the forerunners of all the modern supermarkets. He knew exactly what he was doing and how to make a profit. At one time there were 27 stores scattered across our region in three states.

Walker came from a very humble beginning in Sevier County. He had very little formal education, and worked here and there including the coal mines in Kentucky. He saved his money and, in 1924, bought into a grocery store. By the time of his death in 1998 at age 96, Walker had become a very wealthy man. He had also become a political force in Knoxville and Knox County.

Elected to city council in 1941 and serving briefly as mayor in 1946 before being ousted in a recall election Walker jumped right back into that fight and was re-elected in 1947. From 1940 until 1970 Cas Walker played politics and most often was victorious in his causes. At one time he supported combining the city and county government and then, 20 years later, turned around and helped defeat the unification of both jurisdictions.

On his death Knoxville Mayor Victor Ashe ordered flags in the city to fly at half-mast. Walker left this life with about $1.3 million in his estate. “The Old Coon Hunter” is buried in Woodlawn Cemetery.