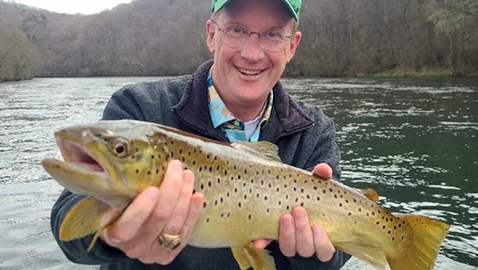 Former Knox County Commission Chairman Hugh Nystrom served one term and chose not to seek re-election. The friendly fellow is very active in the community and his family and has an interesting history.

The Knoxville Focus caught up with him and asked him a few questions.

What are you doing now professionally?

Currently I am working on the administrative team for the Webb School of Knoxville as the Director of Development.

How did you get into your profession?

I have been blessed with a career that has included many professional changes over the past 30 years.  In 1992, shortly after graduating from UT with a finance degree, I moved to Orlando and went to work at the Walt Disney Company.  What I thought would be just a few years led to a 14-year career working in leadership roles in resort management, guest services, and sales and marketing for the Disney parks and hotels and Disney Cruise Line. It took me all over the Southeast.

I left Disney 16 years ago when my wife and I moved back to Knoxville to start our family. Moving back to Knoxville and becoming a parent led to a 180-degree career change!  I went to work in the social work field as a director of development and program operations for Childhelp, a role I held for 11 years. Childhelp serves abused and neglected children. Serving the community in that role was what eventually lead me to run for county commission.

Four years ago, I had an unexpected opportunity to move into the education field working for the Webb School of Knoxville. I am a Webb graduate and my son has been a Webb student since kindergarten, so it was a natural fit. I am blessed to work with a great team, and I get to spend at least some part of every day with my child. It has been amazing.

What is your favorite past position?

I would be remiss if I did not mention some of the roles I had working for Disney! Working on the sales and marketing team for Disney World and Disney Cruise Line was my dream job. I was in the position for six years, based out of Nashville and covering the Southeast region. However, I was not hired into that position.  I started as a front desk host at Disney’s Caribbean Beach Resort making $5.65 an hour and made extra money by parking cars and carrying luggage.  It took many years of both hard and smart work before I was promoted into my dream job.

Who are some of the people you worked with over the years and do you have a favorite?

I learned the most about leadership from Keith Bradford, who was one of my bosses at Disney. Keith gave me one of my first promotions at Disney. He eventually became a vice president at Disney World and was instrumental in the re-development of Downtown Disney/Disney Springs. He was a good friend and mentor. He taught me the importance of accountable leadership, finance skills, AND complementing those skills with authentic relationships and care for those who you work with.

Another great friend I worked with at Childhelp was Dennis Sajdak. Dennis was an old school New Yorker who was our vice president of operations. His background was hospital administration. He always reminded me that what gets measured gets worked on… he was also the only person I know who was worse with puns than I am.

I have been married for 16 years to my beautiful and smart wife, Angelia. Angelia is from historic Dandridge in Jefferson County. Angelia is an attorney and the executive director of specialty programs for The University of Tennessee Institute of Agriculture. She works hard yet still has time to run the Knoxville summer swim league (GKAISA) and volunteer with the Knoxville Garden Club and the state and local Bar associations.

Our son, Trace, is 15 years old and a freshman at Webb. He loves to fish.

Trace is a year-round competitive swimmer. He is also a Boy Scout who just started working on his Eagle Scout project.

Do people recognize you often?

What are your hobbies or interests?

My son and I both love to fish! Over the past four weeks we have fished the French Broad and Clinch Rivers as well as Fort Loudon and Tellico Lakes. The highlight for me was a 5-lb. brown trout on the Clinch!

I love being part of F3. F3 is a free men’s fitness group that has workout locations all over Knox County. F3 stands for Fitness, Fellowship and Faith. Trace and I both go to F3, several times a week, and he and I often lead workouts and devotionals.

I also like to shoot sporting clays. The book I am reading right now is a biography on Chesty Puller.

What are your future plans?

Travel to Europe as soon as it is open/post-Covid, volunteer more at swim meets, keep fishing, keep working…