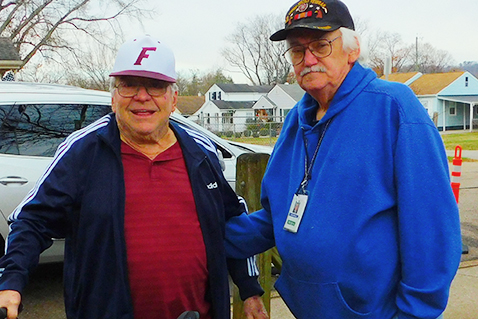 Catching up with Larry Cox

He’s been a dynamo of involvement in the city, county, and especially North Knoxville. His career in athletics and coaching paralleled his many years of service as a city council member and community involvement. As past coach and director of the non-profit Knoxville Falcons the organization he helped make possible for thousands of children in Knoxville to have access to learn and play baseball, basketball, football, softball and cheerleading.

Larry Cox has been slowed by a stroke but is recovering and, in his wheelchair or on his walker, he’s out and involved in the community again. He has a community center and athletic field named for him. He is full of memories of those people who he has known over the years.

It might surprise you to learn that he served more than 15 years in the Air National Guard and graduated from Cumberland University in Lebanon, Tennessee, in 1963 with an Associate Arts Degree. He moved on to Middle Tennessee State for his bachelor’s degree before his military service.

The Knoxville Focus caught up with Cox recently and asked him a few questions.

Tell us about your years with the Falcons Youth Athletics.

I got involved when I was five years old playing T-Ball. I’ve been involved with the board, picked it up and coached kids 12 and under and 16 and under. I played football at Fulton and also played for the Knoxville Raiders when we beat the Falcons one time–I guess I was twelve then. I had great coaches and we made sure to teach the kids the fundamentals. In high school, I was involved with the Key Club and the High Y.

What are your favorite memories from when you served on the Knoxville City Council?

Two men, Kenneth “Red” Bailes and Dr. Ted Beeler, came up to me and asked me to run. Until then I never had an interest in running for office. In that first race, there were five of us in the old 5th District. I was elected and sought advice. Jean Teague had been there for years and told me, “Just sit and listen,” and my first project was to get Christenberry’s field dried up with a French drain thanks to Mayor Kyle Testerman.

How did you get involved with Chicken City? What is Homestead Egg and Poultry?

Chicken City used to be over there on Magnolia operated by Harrison Poultry and operated for about 20 years. When it was closing I got involved and the Harrisons said if I would hire them and keep the employees that they would run it for me. I had a company, Homestead Egg Company on Central, and moved it there and added “Chicken City.” My nephew operates Homestead now.

My wife, Brenda, has been a (workhorse) when it comes to helping me out during this stroke. I have a daughter who teaches school at Alcoa Elementary School; she has a boy and girl. My son, Shane, worked at Chicken City for a while and he has a little daughter. I’ve coached football, baseball and basketball at Christenberry.

I am basically a Republican but never ran with a label. I attended Middle Tennessee State University and majored in political science and history. I got involved in supporting the Civil Rights Act at Cumberland University because everybody should be equal. Locally I’ve supported Lynne Fugate, Indya Kincannon and Janet Testerman in non-partisan city elections.

How has your stroke slowed you down?

It slows you down but doesn’t hurt you badly. Hubert Smith, who had a stroke a few years ago, told me how well you do is up to God and you. I do a lot of therapy. I’m 80 years old and exercise at the pool at Tennova, and do what I call kitchen sink therapy, where I hang onto the sink and do squats.

The Larry Cox Senior Center is named for you. Want to comment?

Mayor Victor Ashe named it for me. I didn’t know that until it was on the city council agenda.

You were a part-time aide to Congressman Jimmy Duncan. Can you comment on those days?

Jimmy and I were golf buddies with Alan Carmichael. I was a volunteer and filled in for Jimmy when he couldn’t attend something, like Boy Scouts events. I was a part-time citizen field representative.

What are your hobbies and interests?

I used to golf but now I stay involved with politics, volunteerism, the Boys & Girls Club, the Phillip Fulmer Golf Tournament, the Knox Sports Hall of Fame, Emerald Youth and the North Knoxville Business and Professional Association.

As an honest person, I love my family, my church, my coaching, and my work with boys and girls.