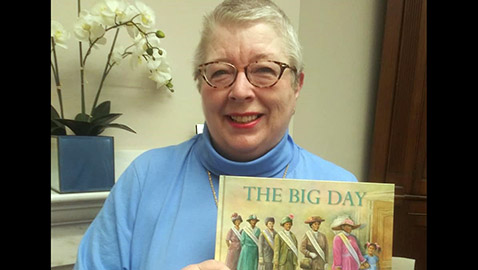 Terry Caruthers is a special project librarian for the McClung Collection of the Knox County Public Library system. She’s a Colonial Village neighborhood resident and was in the last class to graduate from Young High School.

Caruthers has a master’s degree from the University of Tennessee. In her position at the McClung Collection, she analyzes old newspaper articles to make sure they are preserved and finds historic articles about Knoxville. Occasionally one of those old news accounts sparks her curiosity and she draws inspiration for writing a book.

The Knoxville Focus caught up to Caruthers recently and she responded to several questions.

As a semi-professional storyteller, I was asked to present a program for a woman’s church group in December 1995. While preparing for it, I encountered a two-sentence newspaper filler that referenced a little-known Christmas legend. Intrigued, I researched it and found nothing more. I then knew, that if I wanted the story I had to write it myself and I did. The manuscript is titled “A Gift of Thanks,” and while it received high personal praise from editors throughout the remainder of the 1990s, it has yet to be published. After writing that manuscript other ideas began to germinate, and I continued to write.

How do you choose subjects to create stories?

I don’t necessarily. They choose me, getting into my head and constantly prodding me until I put pencil to paper. For instance, my forthcoming book “Red and Me” (Star Bright Books, 2024) was not anything I had on my writing radar. Then at 6:00 a.m. on July 4, 2018, I was awakened by a ten-year-old girl in my head, nagging me about her mountain town and an old stray dog that had caught her heart. I got up and wrote for eighteen hours that day. This middle grade novel only took two months to write because I was essentially transcribing what Marlene was telling me in my head. I give my central character full credit for this book.

Tell us about your family and childhood.

I’m a product of South Knoxville and the Colonial Village neighborhood, the firstborn child of high school sweethearts, Horace Grissom, Jr. and La Vada Prater—both born and raised in North Knoxville. I was an only child for nine years before being presented with a sister and—two years later—twin brothers. Both my parents worked, my father for what was then Park National Bank and my mother for Tennessee Valley Florist Supply and later as the accounts manager for the Knox County Public Library.

Up until I started nursery school, my days were spent in North Knoxville with my paternal grandparents—primarily my grandmother since my grandfather was an engineer with Southern Railway. I dearly love and cherish my fond memories of their neighborhood and that wonderful old house at 803 Luttrell Street (703 now). I was crushed when my grandparents moved from there in the mid-1960s. I attended Mooreland Heights Elementary School and Young Junior-Senior High—being a proud member of the school’s last graduating class in 1976. Then I attended UT for both my bachelor’s and master’s degrees and began working part-time as a desk assistant/ page for the library system on May 5, 1978.

My experience was unique in that I have childhood memories from East, West, North, and South Knoxville. While I lived South and stayed with my grandparents in North Knoxville, often venturing downtown with them to shop. I attended nursery school and kindergarten in East Knoxville, being treated to breakfast at the Blue Circle along the way. I had my first taste of pizza at the Pizza Palace on Magnolia Avenue and still visit regularly. Since my grandmother’s dearest friend lived in West Knoxville, I often found myself tagging along when they would visit or go fishing. It’s these memories and experiences that often find their way into my writings.

What are your memories of serving on the Neighborhood Advisory Council?

It was a great honor to represent and serve the 1st District in that capacity. I had the opportunity to work with an incredible and impressive group of individuals united in and dedicated to making our neighborhoods and community a better place to live.

Tell us about being a librarian for the McClung Collection.

I’m a special projects librarian, currently tasked with assessing historical newspapers for preservation. As part of this task, I note articles of interest and create subject tags about their content. I love this project not only because it unearths lost history, but because it has presented me with a treasure trove of writing ideas. One of them is an in-progress time-travel novel that incorporates some of these historical events as well as a children’s book series I’ve titled “A Glimpse of Knoxville, Tennessee History.” Currently, I’ve written about seven of these which are based on forgotten events in the city’s past, and I am hoping to one day find a publisher with an illustrator to bring these amazing stories to life.

What is your next book?

That is not a simple answer! In the fall of 2023, Star Bright Books will be publishing a children’s biography they asked me to write: “Raphael Lemkin, Citizen of the World: The Man Who Created the Word Genocide.” Then in 2024, they will be publishing the book that is my heart, “Red and Me.”  It is a cross between “Old Yeller” and “To Kill A Mockingbird.” My publisher has compared it to “Because of Winn-Dixie.” Last month, I finished writing a young adult novel titled “If Love Was A Smell.” It begins critique group in May, and I’m hoping to submit it to Black Rose Writing in 2023.

Bring us up to date on your different books please and where someone can get a copy.

“Sergeant Stubby, Soldier-Dog” (Schoolwide, Inc., 2015) is not currently available. I’m hoping to find a publisher to reissue it. “Vivie’s Secret” (Black Rose Writing, 2020) is based on the life of a woman I met through cat rescue. Upon her death, I learned of her incredible past and knew her story must be shared. My picture book “The Big Day” (Star Bright Books, 2020) celebrates Agnes Sadler’s historic vote, and I’m delighted to share that it won 1st Prize in the Early Reader category at the Feathered Quill Book Awards. “The Faithful Dog: A Civil War Novel” (Black Rose Writing 2022) releases on July 7, 2022.

“The Big Day” is about the first Black woman to vote. Tell us about your research for that book.

“The Big Day” evolved from discovering Agnes Sadler’s name in a 1919 Knoxville Sentinel article titled “Women at Polls Early to Vote.” It listed the names of every woman who was first at the Knoxville polls on September 6, 1919. As I began to index them, her name stood apart from the others because it was the only one not preceded by “Miss” or “Mrs.” and had ”col.“ printed beside it to designate she was ”colored.“ As I drove home that evening, I thought about what a momentous day that had to have been for her.

After I finished the manuscript, I reached out to our wonderful historian and civil rights icon Bob Booker and, later, Renee Kesler of the Beck Cultural Exchange Center for feedback on what I’d written. Once they gave the book their stamps of approval, I began seeking a publisher. I had three companies express interest in it, and Star Bright Books was the first to send me a contract. The most rewarding aspect of this book was being able to connect with Agnes Sadler’s descendants and share the news of their great-grandmother’s historic vote.

Your latest book “The Faithful Dog” is about the Civil War. Where did that inspiration come from?

I encountered the story of Second Lieutenant Louis Pfeif of the Fifty-Eighth Illinois Infantry and his dog while doing research for my book, “Sergeant Stubby, Soldier-Dog”. I was mesmerized by the historical account and knew I had to share it. Upon completing the manuscript, I sent it to an editor at Lucky Marble Press. While she liked it, she recommended rewriting the novel solely from the dog’s point of view. By the time my rewrite was completed, Lucky Marble was no longer publishing. I then sent the manuscript to my Black Rose Writing publisher and was given a contract on it.

You basically write books for children. Why is that?

I disagree with that assessment to some degree because I am currently working on at least two manuscripts for adult readers. Also, while “The Big Day” is a picture book, “Vivie’s Secret” hardly falls into that category even though the book begins when she is twelve. Some adult themes are woven into the novel as it follows her escape from Hungary during the Russian invasion and into her later years as an adult. That said, I do have a passion for children’s books—especially picture books, and my library degree is in Children’s Literature and Services.

What are your hobbies?

My hobbies include cross-stitch, jigsaw puzzles, and watching classic films—meaning those old black-and-white treasures from the 1930s-1950s. And let’s not forget reading! I guess the follow-up question would be, “What do you like to read?” Southern literary fiction, coming-of-age novels, mystery, and suspense. My favorite book is Harper Lee’s “To Kill A Mockingbird”—which I’ve read every year since ninth grade.

While I’m a retired rescuer and socializer of feral cats—and have a passion for them, I’m an animal lover in general and always have been. My mother once said I have a ‘tender heart’ when it comes to them. She often related having to leave the Riviera Theater with me when I was three because I became hysterical after Trusty was run over by the cart in Walt Disney’s “Lady and The Tramp.”

As a person who was a champion of South Knoxville and the Colonial Village neighborhood, working in the best interests of both, and as an author who shared many well-loved books and stories.