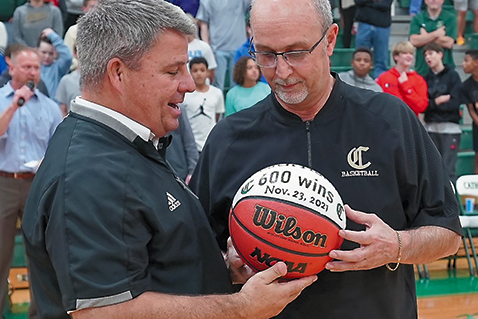 Knoxville Catholic faced the ultimate challenge in the Final Four of the TSSAA’s Division II-AA BlueCross Basketball Championships this season.

If the Irishmen were going to send longtime head coach Mike Hutchens out a winner in his final game, they would have to beat not one, but two undefeated opponents.

They opened with a 63-55 semifinal win over 30-0 Brentwood Academy Thursday, but couldn’t complete a storybook ending Saturday afternoon, falling to Christian Brothers High School of Memphis 79-72 at Tennessee Tech’s Eblen Center in Cookeville.

For a few moments though – when senior standout BJ Edwards swished in a 3-pointer from the left wing to pull Catholic within one (63-62) with 3:10 remaining and the Irish faithful chanting “BJ, BJ, BJ …” – carrying Hutchens off into the sunset was more than just a hope.

Despite two baskets by CBHS, junior Blue Cain’s longest 3-pointer of the day still had Catholic in it (67-65) with two minutes to go.

But Blue, a 6-4 guard who led the Irishmen with a 31-point effort, fouled out on a reach at 1:21 and as his heart sank so did the hearts of many others wearing Green and Gold.

Two free throws by Hunter Pratt capped a 6-0 run that gave Christian Brothers a 73-65 advantage with under a minute to play.

In the post-game interview room, BJ talked about how the team wanted to win for their coach in his final game and he apologized that they didn’t.

Hutchens, just a few feet away, said he couldn’t have been more proud of his boys and their effort.

Only once did Hutchens have to fight back tears.

“These last three years are three of the best teams in the history of Catholic. We won the state (2020 season) playing in one of the toughest divisions in Tennessee.”

Coach Luckett pointed to Pepper’s performance as one of the keys to the victory. The 6-1 junior guard may have had the game of his life. He only missed one shot, connecting on 8 of 8 from the field and 4 of 5 at the line.

But the Purple Wave also was red-hot as a team, shooting a blistering 66 percent from the field (31 of 47) and sinking 16 of 21 free throws. They attempted only three 3-pointers.

Pratt, a 6-6 forward, contributed 13 points to the CBHS total, a fast and athletic Zion Owens 12 and sixth man Ashton Strother 10.

In addition to Cain’s 31 points, which included making four of nine 3-pointers, Catholic got 21 points from Edwards, although it wasn’t one of BJ’s best shooting nights. The UT signee was 6 of 22 from the field and 2 of 7 on his 3-point attempts.

When asked what he felt was the difference in the game, Hutchens said: “We got hurt by offensive rebounds. And when we tried to turn our pressure up, they were able to sweep us to the goal and get some easy shots. They did a good job of handling our pressure and probably about as good as anyone has all year.”

STATE HONORS: Edwards, Cain and Lindsey made the All-Tournament team.