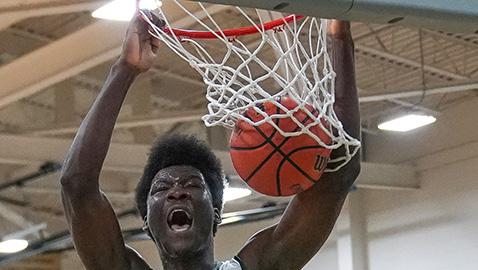 As high school basketball season moves closer to tournament time, which are the best teams on the local scene?

The Knoxville Focus has delved into regular season results going back to November and ranked a First Five for boys’ and girls’ teams based on games played through Thursday (Jan. 16).

Catholic, in its first season in TSSAA’s Division II Class AA, is No. 1 among the boys. Coach Mike Hutchens’ Fighting Irish are 13-2 but haven’t lost to an in-state team.

The Irishmen’s losses came against Gonzaga College High of Washington, D.C. (67-61) and Clay County, Ky. (56-55) during December holiday tournaments out of state.

Catholic has five starters back this season, including sophomore point guard B.J. Edwards, who is averaging 19.5 points and 5.9 assists per game. He reportedly has scholarship offers already from Tennessee and Auburn.

Senior captain Akeem Odusipe, a 6-9 power forward who also is being heavily recruited, is averaging 17 points and 13 rebounds.

“Cohesiveness and good team chemistry” have been strengths of the team, said Hutchens, who is in his 31st season as head coach.

The biggest change in moving to Division II Class AA said Hutchens is “the travel.”  Six of Catholic’s first 10 games were out of state.

Catholic also can give financial aid in the Division II classification.

Webb’s boys rank No. 2 in the Focus’ First Five. Coach Ricky Norris’ Spartans, who won their first state championship last season in Division II Class A, are 14-5 and notched their fifth straight win with a 55-54 victory over Chattanooga Baylor Jan. 14.

In the girls’ ranking, Bearden has earned the No. 1 position with an 18-1 record. The lone loss for Coach Justin Underwood’s team came on Dec. 19 against defending Class AAA state champion Bradley Central 36-26 in the 5Star Prep Classic at Farragut.

The Farragut Lady Admirals rank No. 2 with a 13-6 overall record.

HOOPS ON TV: A District 4-AAA showdown matching the Bearden and Maryville girls and boys will be featured on WVLT Rivalry Hoops Tuesday night, starting with the girls’ game at 6 o’clock.