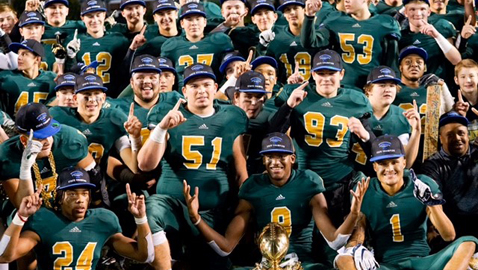 Knoxville Catholic Coach Steve Matthews’ pre-game keys for winning the TSSAA Class 5A state football championship were to “use size” and “max possessions.”

The Fighting Irish checked off both items in a convincing 45-28 win over previously unbeaten Beech Thursday night in the Blue Cross Bowl at Tucker Stadium in Cookeville.

Except for a brief lapse at the end of the first half and the start of the second, it was pretty much the Big Green’s night.

Catholic scored points on all four of its first half possessions and the first two times it had the ball in the second half plus got a huge touchdown from its defense. Only until the closing minutes did the Irish punt.

“We had them outsized and Beech surely showed a lot of heart,” said Matthews. “But our guys made the plays tonight. It’s just been a joy to coach these young men all year long.”

It was the second state title for Catholic’s 12 seniors, who were dubbed the “Dirty Dozen” this season. The big and physical Irishmen end up 12-3 with losses to a trio of powerhouses. They finished with a nine-game win streak.

Beech, which is located in Hendersonville, goes out 14-1.

Senior quarterback Jack Sompayrac, named the game’s MVP on offense, threw two touchdown passes and ran for two more. Dashon Bussell, who transferred to Catholic for his senior season, was on the receiving end of both.

Sophomore Stiles Moore’s 32-yard fumble return for six points was the defensive play of the night. Senior lineman Larry Liverman, who forced the fumble and had nine solo tackles, was the MVP on defense.

Catholic drove 79 yards in 12 plays to take the lead at the outset. Cameron Blakely caught a 37-yard pass despite double-team coverage to highlight it. Sompayrac lobbed a 16-yard pass over a defender and into Bussell’s hands to cap it. Paxton Robertson kicked the first of his six PATs.

A beautiful 49-yard quick kick to the 1-yard line put the Irishmen in a hole, but Joshua Brown’s best run of the night on second down gained 47 yards. Brown fought off tacklers and broke away.

The drive stalled, but Robertson booted a 23-yard field goal to make it 10-0 at the end of the first quarter.

Joe Fluker had a 22-yard run on Catholic’s third possession and Brown plunged off right tackle from the 1 to make it 17-0.

Beech made a run as a wide open Hoosier hauled in a 33-yard TD pass 21 seconds before intermission.

“I was extremely disappointed in that,” said Matthews at the break. “That’s bitten us all year long (long plays for touchdowns).”

The Bucs continued their momentum into the second half when the small but speedy Kaemon Dunlap made a nifty spin move and then got a block by Hoosier on the corner that allowed him to complete a 20-yard TD scamper.

All of a sudden Catholic led by only three points.

DJ Mitchell reacted with a 38-yard kickoff return to the 50. Sompayrac completed long gainers to Bussell and Blakely and scored on a 10-yard keeper.

Then Moore’s scoop and score pushed the lead back to 17 points.