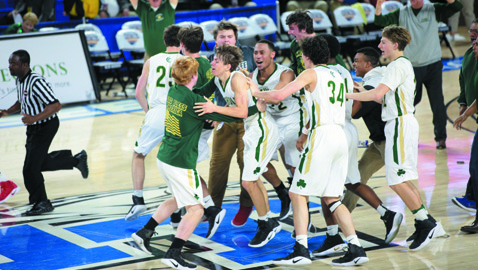 Knoxville Catholic’s historic season came to an end Saturday in the Class AA state championship game when the top ranked Irishmen fell to Nashville Maplewood 60-57. The Panthers got off to an early lead and led most of the game as Catholic was hampered by foul trouble. Catholic’s standout senior point guard Luke Smith missed most of the third quarter as he was sidelined with three fouls. Catholic was led by Brock Jancek (16 points), Davari Reeder (11 points) and Smith (10 points). The game came down to the last play when Smith’s desperation 70-foot shot failed to go in.

The prominent color in Murphy Center, home of the Middle Tennessee State University Blue Raiders, is blue of course. But green stood out too at the site of the TSSAA state basketball tournament Friday afternoon, and not just because it was Saint Patrick’s Day.

Luke Smith, clad in the Green and White colors of Knoxville Catholic High School, hit a 25-footer at the buzzer to give the Fighting Irish a thrilling 56-53 win over Nashville Whites Creek in the Class AA semifinals and a berth in the state championship game for the first time since 1976.

Luke’s shot was so huge, so dramatic, the Irishmen, who had been keeping their emotions in check after each step of the way on the tournament trail as they focused on their ultimate goal – a state title, couldn’t contain their happiness this time.

“I don’t think I’ve ever been that happy,” said Smith, seated next to Brock Jancek and head coach Mike Hutchens in the media interview room after the game.

They just had to celebrate a little.

“That one’s kind of hard to just stand there and take, with an ending like that,” inserted Luke.

The win was the 28th in a row for 31-1 and top-ranked Catholic, which was scheduled to play Nashville Maplewood (28-7) for the title in the BlueCross Basketball Championships this past Saturday in Murfreesboro. Maplewood pulled out a 57-56 win over Haywood in the other semifinal dandy.

“I had a feeling it would be a grinder,” said Coach Hutchens. “I thought both teams played great defensively. I thought in particular Brock did a great job on their center (6-9 Ruot Monyyong), fronting him, moving his feet and getting in good position, because the kid can play.

“Luke’s plays at the end and our defense are what carried us through.”

Smith, Catholic’s talented senior playmaker, didn’t have a great shooting night from the outside overall. In fact, Luke misfired on three 3-point attempts in the opening period while Whites Creek took a 15-8 lead. Smith’s first 3-point basket of the game came with 1:51 remaining and gave the Irish a 51-50 lead.

But in addition to the dagger at the end, Smith also hurt the Cobras (29-6) in other ways. He was 8 for 8 at the foul line and totaled 20 points. He produced eight assists with pinpoint passing. He came up with six steals.

Jancek, Catholic’s 6-7 junior, had his hands full battling the slender but strong Monyyong, who had 11 points, 16 rebounds and six blocks plus altered countless other attempts by the Irish.

Dawson Anderson, a 6-4 senior reserve, gave the Irishmen a lift, particularly in the early going, and finished with two points, five rebounds, one blocked shot and one steal plus took a charge from Monyyong in 17 minutes of action.

The Cobras’ top scorer with 17 points was junior guard Dennis Stallings, who drove inside and hit a little runner to tie the game at 53-all after Whites Creek put the ball in play side front court with 13.7 seconds left.

It was a big shot by Stallings, but not near as big as Smith’s runner that was launched five to six feet behind the 3-point arc at the top of the circle.

“It was kind of a weird shot,” said Smith. “I shot it on the run. I just kind of flicked it. It’s not really something you practice. And I’m glad Coach didn’t take a timeout.”

Hutchens revealed he and his assistants had decided during Whites Creek’s last timeout to call a timeout of their own if the Cobras tied the score, put Jack Sompayrac back in the game and set up a play.

“When they hit it and we got it in to Luke and he started with a steam down court, I just (thought) let’s see what happens and he made the play,” said Hutchens.

Luke’s shot was so far away, the ball seemed to float in slow motion as Irish eyes, in the stands as well as on the court, helped guide it into the hole.

As the horn sounded, the Cobras had to be feeling blue and green with envy, too.

Yep, blue and green – kind of like Murphy Center was on Friday.

GCA RAMS FALL: While Catholic enjoyed the thrill of victory in the semifinals, another Knox County state title hopeful, Grace Christian Academy, experienced the agony of defeat as the Rams bowed 76-70 to Clay County, also known as Tyreke Key and Company, in the Class A semis.

Key, an Indiana State signee who set a state tournament single game scoring record with 54 points in a quarterfinal win over Loretto on Thursday, bettered Tony Delk’s state single season scoring record with 34 points against GCA, upping his season total to 1,343 points in 36 games. That’s an average of 37.3 points per game.

Grace Christian led 23-18 after one period but trailed 47-46 after a high-scoring first half, despite shooting 62.1 percent from the field.

The game was tied at 59-all after three periods, but six straight points by Clay County sophomore Gavin Silk midway through the final period gave the Bulldogs a 67-63 lead that GCA couldn’t overcome.

Making its third straight trip to the state, GCA hung up a 28-9 season record under head coach Mike Doig.