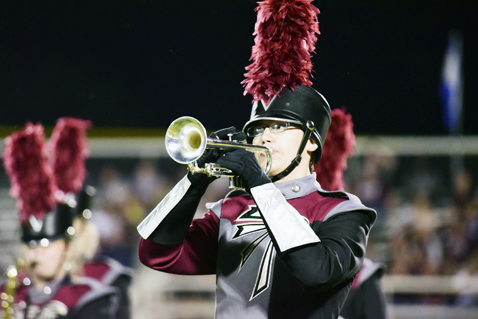 Knoxville Catholic’s football team has come up short in two high-profile games this season, but will get another chance Friday night when it hosts the No. 1 rated team in the state.

Perennial powerhouse Brentwood Academy will come to town with the distinction of being the state’s top team counting all classifications.

Only Hurricane Irma has been able to stop Brentwood Academy. The Eagles’ home game last week against Broward (Fla.) International was cancelled by the hurricane that hit Florida.

Brentwood Academy is the state’s top overall team in Sonny Moore’s Computer Power Ratings. Catholic was No. 4 behind Brentwood Academy, Murfreesboro Oakland and Maryville in the state ratings posted Sept. 12. The Irishmen have a 3-2 record after Friday’s 49-48 come-from behind win at Soddy Daisy.

Catholic’s two defeats have come against Maryville, 49-42, in the season opener and in a 55-10 home loss to Eagles Landing Christian Academy (Ga.) Sept. 1.

“Eagles Landing was an outstanding team from outside Atlanta,” said Steve Matthews, Catholic head coach. “We didn’t play very well and the score got away from us.”

Matthews said his team “responded really well and had a great week of practice” after the loss. His Irishmen bounced back with a 33-7 win at Cleveland in Week 4.

Against Soddy Daisy, Catholic fell behind 21-0 in the first quarter.

“We were sluggish in the beginning,” said Matthews. “Soddy Daisy did a great job of jumping out on top. But we were able to score six touchdowns in the second quarter to give us a halftime lead.

“Brentwood Academy is an outstanding team. We’ll have to play much better to stay in the game.”

Brentwood Academy is seeking a third straight state crown. The Division II-AAA Eagles were ranked No. 15 in the nation in USA TODAY’s preseason Super 25. They have two Vanderbilt commitments (QB-TE Gavin Schoenwald and WR-LB Camron Johnson), one player (WR-DB Daniel Taylor) who has committed to Navy and another player (LB Jackson Sirmon) who has committed to Washington.

Catholic has two commitments at this time – lineman Cade Mays to Tennessee and WR-DB Cam Blakely to Miami of Ohio.

COMEBACK WIN: Gibbs recorded its first win of the season in Week 4 by erasing a 20-point deficit to nip David Crockett 21-20.

“It was fun to see the kids rewarded for fighting back,” said Gibbs Head Coach Brad Conley. “Individually, Trey Mullins rushed for 106 yards and two TDs. On defense, Noel Leyva and Alex Mase played well. Overall, the secondary played well against a team that had put up 35 and 55 points in its previous two games. Against us, Crockett only had 80 yards passing. It was a great team win.”

HALFWAY POINT: Five weeks into the season, Farragut is 5-0 and Fulton 4-0.

Once-beatens include Powell and The King’s Academy at 4-1. Austin-East is 3-1.

Also above the .500 mark at 3-2 are Bearden, Hardin Valley, Knoxville Catholic and West.

PREPS OF THE PAST: Twenty years ago, on Sept. 12, 1997 – After being shut out in its first two games of the season, Bearden finally got into the end zone on a 2-yard run by quarterback Jarod Hubbard with 8.4 seconds to go in the fourth quarter to post a 7-0 win at South-Doyle.

The contest turned into a punting duel between Eric Hood and South-Doyle’s Jeff Witenbarger. End Damon Bolland and tackle Stephen Manning were defensive leaders for the Bulldogs, who gave up only 114 total yards.

On the same night, Dustin York scored from the 1 in the final seconds to lift Karns over West 20-15 at Karns. It was the Beavers’ first win of the season, while the Rebels dropped to 0-3. Karns Coach David Bankston said York also had a great game on defense before his game-deciding score.