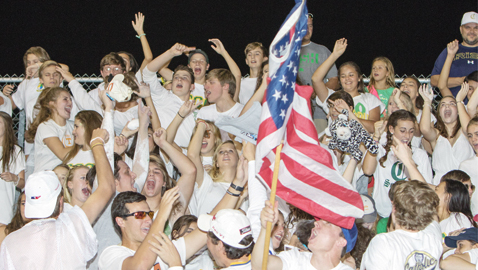 Over the past few years Fulton and Catholic has turned into one of the state’s biggest rivalries.

Today, it appears that the Fighting Irish have taken a step ahead of the Falcons.

On Thursday, September 15th, top-ranked Catholic looked like the team to beat in Class 4A in Tennessee, knocking off Fulton 69-42 in North Knoxville.

“We did a nice job on offense, we protected our quarterback, and our receivers were outstanding,” said Catholic head coach Steve Matthews.  “We ran the ball well and really did a nice job all the way around.”

The Irish jumped out to a quick start with a 69-yard drive, culminating with a 15-yard touchdown pass from Chase Cunningham to Chase Kuerschen.   Only 87 seconds into the game, it was 7-0 Catholic.

On the third possession for the Irish, they were pinned back at their own 4 yard line.  But that wasn’t a problem.  The Irish mixed the pass and the run, and eventually Joshua Brown powered his way in from the two yard line, and it was 14-0.

The scary thing for the rest of the state is that Catholic (4-1, 2-0 in Region 2-4A) has so many weapons on offense.  Jeffery Wood had huge holes to run through, and Jeffery Wood ran it into the end zone untouched from 36 yards away.

After the first quarter, it was 21-0 Catholic.

The Falcons wouldn’t quit, however.  Sophomore quarterback Xavier Malone scrambled, then heaved it deep towards the end zone, where Dashaun McKinney adjusted to the football, caught it at the 3, and strolled past the goal-line for a 52-yard touchdown.  The extra point was blocked, but Fulton was on the board, down 21-6.

The score happened with 11:19 to go in the first half.   Only 44 seconds later though, Catholic got those points back.  Joshua Brown made a couple of nice moves, cut to the outside, and scored his second touchdown of the game from 10 yards away, making it 28-6.

The points kept coming, and the Irish went into halftime with a 42-12 lead.

What a first half it was for Cunningham.  Two touchdown passes, a touchdown run, and over 350 yards through the air.

“He’s outstanding.  He (Cunningham) practices well and is only continuing to get better,” said Matthews.  “We talked about completion percentage during the off-season.  He’s at 60 percent now.  He isn’t throwing interceptions and he is playing as well as any quarterback can play right now.”

On the evening Cunningham threw for five hundred yards and five touchdowns.  His go to receiver for three of those scores was Kuerschen, who had over 250 yards receiving.

In the second half defense was hard to find, and both teams found their way into the end zone on multiple occasions.  Fulton’s Malone ended up with five touchdown passes himself.  But Catholic’s dominance was so complete that the game was played with a running clock for some of the fourth quarter when the Irish led by more than 35 points.

“We know that Coach Black does an outstanding job,” said Matthews.  “They are so athletic.  They were banged up which hampered them tonight, but they are our measuring stick.  We have a huge test next week against Belfry, the Kentucky state champs.”

Fulton will try to get back on track with another home game, against Gibbs.