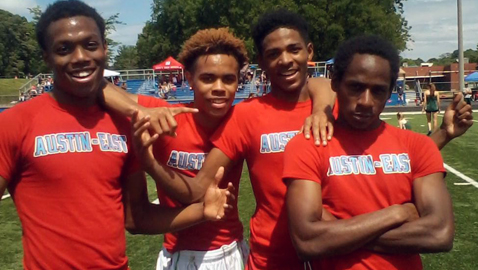 Knoxville Catholic started the 2015-16 school year with a state championship in cross country last fall. The Irishmen would like to end it with a Class A-AA title in outdoor track and field this week at the TSSAA Spring Fling in Murfreesboro.

After state qualifying was completed in the East sectional meet last Thursday at Christian Academy of Knoxville, Catholic head coach Sean O’Neil considered his team as one of the top four state contenders, along with Greeneville, Nashville Stratford and defending champion Nashville Pearl-Cohn.

Greeneville took first place in the East Sectional with 122½ points. The Greene Devils started the day with already having scored 24 points from a 1-2-3 finish in the decathlon.

“The points will be a lot harder to score at the state,” said O’Neil.

Johnathan Chavez led the way for the Irishmen. He anchored the winning 4×800 relay team, which has won back-to-back state crowns, and won the 3200-meter run in 9:40.19, holding off a fast-finishing Gashaw Duhamel of Tennessee School for the Deaf.

“I’ve just found myself to be more comfortable out front,” he said. “It allows me to test my fitness and sometimes have an exciting race.”

Chavez, who has signed with Georgetown University in Washington, D.C., also was second in the 1600 and ran on the 4×400 team, which placed third and hopes to get an at-large berth in the state.

Chavez likes contributing to the team aspect of the sport.

“I’m making myself more comfortable to running four events,” he said. “We realize we have a chance at the state title.”

Joining Chavez on the 4×800 team, which was clocked in 8:29.35, were Ethan Tornstrom, Jake Renfree and Georde Goodwyn.

Catholic’s Amari Rodgers and Alec Connolly also qualified for the state with second-place finishes in the 100 and 400, respectively.

Austin-East’s Christopher Stevenson, another freshman, made a second place showing in the 110 hurdles.

Two-time state champion Rhett Elwood of GCA finished third in the discus event with a throw of 130-2.

On the girls’ side, Rebecca Story was the story. The CAK sophomore, one of the nation’s top prep distance runners, ran in four races and was a winner in all four, starting with the 4×800 relay, which she anchored.

With Story leading the way, the Lady Warriors racked up 109 points, second only to Signal Mountain’s 126.

Carter’s versatile Shelby Reynolds, who previously had qualified for the state pentathlon, also will be competing in the 300 hurdles and triple jump at the state as she came in second place in those two events at the sectional. She was fourth in the long jump.