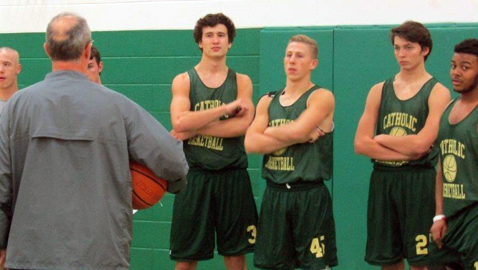 Jack be nimble, Jack be quick …

Jack Sompayrac of Knoxville Catholic High School made the transition from football to basketball in less than 24 hours.

“On Thursday night he was MVP on offense in the Blue Cross Bowl and on Friday night he scored 16 points and had five assists and four steals for us,” said Catholic basketball coach Mike Hutchens, smiling at the thought of his talented senior’s versatility.

In the Irishmen’s 45-28 Class 5A state football championship win over Beech at Tennessee Tech in Cookeville, Sompayrac threw two touchdown passes and ran for two more.

Having Christian Academy of Knoxville on the basketball schedule the next night made it a near no-brainer that Jack would be making the quick turnaround.

“I remember thinking I would most likely play because it was CAK, a big rivalry game,” said the 6-2, 195-pound Sompayrac.

Catholic defeated the Warriors too, 75-70, on the road. Known as one of the area’s best long-range shooters last season, Jack hit a 3-point shot in the first period and made five of eight free throws in the game.

“I’d say definitely my shot was off against CAK, but I was able to hop in and fill a different role for the team and bring some energy and physicality, especially coming out of football,” he recalled.

“I actually ended up fouling out that game. I guess that kind of shows I was still in football season a little bit. One of the refs was actually giving me a hard time about it, saying, ‘It’s basketball season now and you’ve got to switch over.’”

The two-sport standout found out there’s a difference between football shape and basketball shape.

Sompayrac figures it will take a week or two to be really ready for basketball.

“Not having shot much for awhile was the reason my shooting was off. I’m shooting more now and feeling the rhythm coming back.”

In the meantime, Jack be nimble, Jack be quick, Jack finds championship and win over a rival a kick.