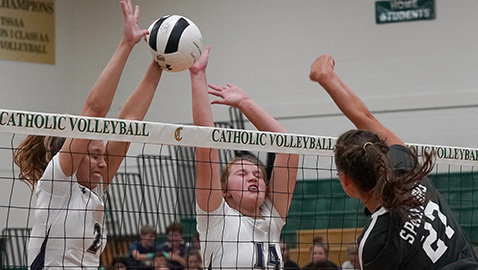 For the second time this season, Catholic High School has beaten Webb School on the volleyball court.

The Lady Spartans (7-11), who fell to the Lady Irish in three sets at Webb on Tuesday, Aug. 20, have sputtered early in the season as they were hit hard by graduation, injury and a transfer.

One player who has dealt with multiple injuries since the conclusion of the 2018 season is Leoni Kunz. She was back Wednesday and Lady Irish coach Brent Carter said that her presence makes Webb a better team.

“Webb is a great team and they’re very well-coached and having Leoni Kunz back in their lineup makes them a very different team and they’ll only get better,” Carter said. “I’m glad that we’re through with (Webb) and we don’t have to play them again this year.”

Catholic (10-3) got off to a fast start in front of its home crowd and took an early 4-0 lead and just kept adding to its advantage.

The Lady Irish, thanks to a huge service run by junior libero Cassie Kuerschen, darted out to a 16-3 lead due to their star. She scored eight points before Lady Spartans’ coach Chris Hames called timeout to stop Catholic’s momentum.

After the break, Webb scored on a side-out before Catholic reasserted control of the set.

Hames said that the Lady Irish boast the top volleyball team in East Tennessee this season.

In the second set, the Lady Spartans opened an early 3-0 advantage and they also led 9-6 before Catholic went up 13-10 on a service ace from Grainne McGrath.

From there, the Lady Irish would never trail again. Carlee Hart had eight kills, one block and a dig. Isabella Amet finished with five kills, a block and a dig and Devyn Dunn, a setter, had 13 assists, six digs and a pair of aces.