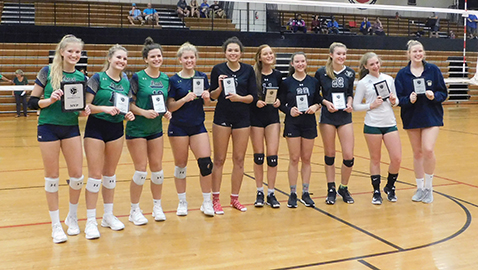 “When this group of seniors came to Catholic, we didn’t have a lot of district championship trophies in the trophy case,” Carter said after his team beat host Central and the Lady Tornadoes to claim another championship and begin its quest for a fourth consecutive trip to the Class AA State Tournament in Murfreesboro. “Now, we’ve won four in a row. We talked about not taking those [district titles] for granted.

“We want the girls to take joy in winning them.”

It took just 52 minutes for the Lady Irish (20-8) to defeat Alcoa (17-18) and win the title. There were no celebrations because Catholic had already turned its attention to Tuesday’s Region 2-AA Tournament, which will be at Anderson County High School in Clinton.

There, the Lady Irish will tangle with District 4-AA runner-up Gibbs while Alcoa will play the host Lady Mavericks, the District 4-AA Champions in an elimination semifinal match.

The semifinal winners will play for the region championship and qualify for Thursday’s state sectionals.

Senior outside hitter Connor Knott, who has emerged as steadying force for Catholic this season came up with some big service runs as she replaced Cunningham (who is nursing a minor shoulder injury) in the service rotation.

“We don’t want Olivia serving because she has a minor injury,” Carter said. “It bothers her when she serves but it doesn’t hurt her to swing.”

The Lady Irish advanced to the title match with a sweep of Central (14-21). The Lady Bobcats were a young team in 2018 but they won a tournament match in four sets over Fulton on Monday, Oct.1 and had their best season since 2002 when they finished third in District 3-AAA.

“We were young and we won 14 games. We won nine last year,” Johnson said.

Alcoa, meanwhile, advanced to the district championship match and the region tournament with a four-set win over the Carter Lady Hornets.

In District 4-AAA: West High School, which has had its share of struggles in recent years. But the Lady Rebels, playing at home, finished as the district tournament runner-up after falling to Oak Ridge in Thursday night’s title match. West beat rival Bearden to continue its postseason run.

The Lady Hawks, which made back-to-back Class AAA State Tournament appearances in 2016 and 2017, led 10-6 in the decisive set before watching the Lady Admirals score nine of the game’s final 11 points.

After a one-year absence, Farragut returns to the region and will face Oak Ridge in an elimination match Tuesday night at Heritage.

Farragut made it to four consecutive state tournaments between 2013 and 2016. It finished second to Brentwood three times between 2014-2016.