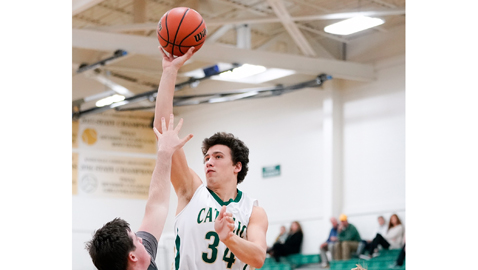 Brock Jancek was a beast inside for Knoxville Catholic in its run to the TSSAA Class AA state basketball championship game last season.

The 6-7, 215-pound power forward continues to be a force under the basket in his senior year, but the improvement of his game overall is what has impressed veteran head coach Mike Hutchens the most in the early going.

“His ball handling,” pointed out Hutchens. “We have actually run him at point guard at times this year when we’ve had to take care of the ball late in the game.

“His 3-point shot and medium-range jumper also have really come along.

Jancek has been Catholic’s top scorer in a 6-1 start in the Irishmen’s return to the Class AAA ranks, averaging 26 points per outing.

He dropped in 22 points in a 72-61 season-opening District 4-AAA loss at Maryville. In that game, Catholic, without its football players, dressed only eight and played only six.

Jancek has had two 30-point games and a season-low 16 in a two-point comeback win over William Blount.

Catholic also had logged wins over Heritage, CAK, West and Grace Christian prior to last Tuesday’s 65-57 victory over visiting Farragut.

Jancek scored 27 against the Admirals (4-7) and senior guard Jack Sompayrac added 14. Catholic led 33-29 at halftime and extended its advantage to 48-38 after three stops.

Coach Hutchens said “defense” was the key to the win, although his team had a good shooting night, making 5 of 11 from 3-point range, 19 of 34 overall from the field and 12 of 15 free throws.

Catholic took a 4-1 district record into its game Friday at Hardin Valley Academy.

Hutchens said his team enjoys being in Class AAA.

“You can see that the crowds are bigger and there is more excitement,” he said. “Our kids know a lot of kids in the league, particularly the Farragut and Bearden kids. They’ve all played against and with each other in AAU and Rocky Top. We’re excited to be in it.”

In the meantime, the Irishmen will play Clinton Wednesday (Dec. 20) as the three-day Heritage Christmas Tournament gets underway.

NOW A TIGER: Former Catholic standout Luke Smith is starting at guard in his freshman season at Sewanee and averaging 13.3 points for the Tigers (4-4), who are at the holiday break in their season.

Smith also is averaging 5.6 rebounds and 4.1 assists for the NCAA Division III team that is a member of the Southern Athletic Association.