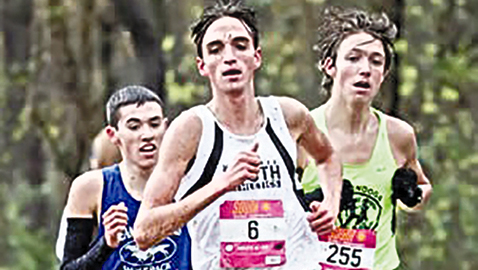 Jake Renfree has earned another run at a national title.

Renfree, who was a surprise fifth place finisher in the Nationals last season, posted a time of 15 minutes, 10.5 seconds – a little less than six seconds behind the winner, Cruz Gomez of Donna, Tex., who finished the 5,000-meter course in 15:04.8.

The race was held at McAlpine Greenway Park in Charlotte. The course was wet and muddy and the temperature 37 degrees.

“Jake was out with the lead pack,” said Catholic Coach Sean O’Neil, recalling the race last week. “The conditions were pretty rough. Muddy and cold. He didn’t want to risk an injury and was satisfied with qualifying for the nationals.”

O’Neil believes Renfree, a Notre Dame signee, has a legitimate shot at winning the national meet and said no one is head and shoulder above the rest.

“I think it will be a tight pack,” said O’Neil.

The top 10 boys and the top 10 girls in the South region’s seeded races qualified to compete against runners from the Northeast, Midwest and West Regional meets in the 40th annual Foot Locker national meet.

Gabriel Tardy, a junior runner for the Knoxville Ambassadors, placed 53rd in the boys’ field of 140 at the South region with a time of 16:05.

London Culbreath of McKinney, Tex., a junior, claimed the girls’ South title in 17:12.9.