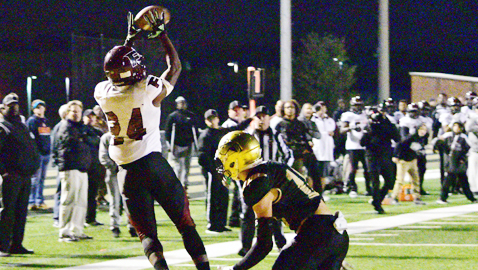 By Steve Williams
The lights will be brighter than ever on Broadway this Friday night.
An unexpected rematch will pit Fulton at Central in the Battle of Broadway Part II.
Many high school football fans had been expecting a Catholic vs. Greeneville showdown in the Class 4A quarterfinals this week. But the Falcons and Bobcats pulled off surprising wins in second-round action.
Fulton rolled at highly-regarded Catholic 46-25, while Central took out previously unbeaten Greeneville 16-14 on the road. Now the two old rivals will be playing for a second time this season and the stakes have probably never been higher in this series.
The Bobcats defeated Fulton 21-19 in the final week of the regular season in Fountain City.
Central advanced in dramatic fashion as quarterback Trey Mitchell threw a 43-yard game-winning touchdown pass to Louis McNair with 6.8 seconds remaining.
“It was a great game between two really special programs,” said Central head coach Bryson Rosser via e-mail Saturday. “Coach Ballard has done a great job with his team. I am very fortunate to lead such a wonderful group of young men.
“The key to the win could easily be the Hail Mary that we scored with six seconds left in the game. Our defense played lights out again, led by Isaac Buell and Jahvere Weste. Our offense was unable to score a bunch of touchdowns, but had a consistent running game behind the offensive line and running back Jadarius Sackie.
“We are very happy and blessed to be in the quarterfinals of the playoffs and are looking forward to another great game against Fulton. Coach (Rob) Black has been very successful and he will have his team ready to play. Both teams are playing good ball and we look forward to the opportunity to dress up one more Friday night.”
Catholic Coach Steve Matthews was gracious in defeat.
“Fulton played a great game against us, they kept us off balance on offense and made the big plays on defense when they needed it, too. They played a great game.”
ON THE WARPATH: South-Doyle’s Cherokees continued their turnaround season with a 34-11 win at Gibbs in Class 5A second-round action. They are now 7-5 after going 0-10 last season.
“We are very excited about the win Friday night and the opportunity this young football team has ahead of them,” said head coach Clark Duncan via e-mail. “Defensively, we played great, forcing five turnovers against a very good offensive team. Offensively, we ran the ball exceptionally well. Our offensive line did a great job against a very big and physical defensive line. Overall, we played all three phases of the game well. We will need to continue to do this in order to compete against a very good Morristown West team this Friday at South-Doyle.”
WARRIORS FALL: Christian Academy of Knoxville saw its season come to an end in a 45-13 loss at Elizabethton in the Class 3A playoffs.
“We struggled last night in several areas,” said CAK head coach Travis Mozingo via e-mail. “We turned the football over, which always makes it difficult to win – several turnovers left the defense with short fields, compounding our struggles. Adding to that was our continued battle with injuries Friday night.
“Elizabethton is a well-rounded team, so give their players and coaches credit.
“For me, as a first-year coach here in Knoxville, I enjoyed every minute spent with my players. I am especially proud of the seniors this year. It can be very difficult to have a coaching change in your senior season, but they’re a special group of young men, who come from great families. I am excited for the future of CAK football.”
RAMS OUSTED: Grace Christian Academy head coach Randy McKamey said it was a “tough loss” after his Rams were eliminated 24-7 at Happy Valley in the Class 2A playoffs.
“We fought bad field position battle all night,” said McKamey via e-mail. “They are a very good senior-dominated football team. We gave up a big play in the second quarter on 3rd and 20 that led to a long touchdown pass to Dylan Street. He’s the fastest player we have seen all year. He runs a laser 4.3 40-yard. They got a field goal late in the second quarter that made it 17-7 at half.
“We lost our tailback (concussion) and a starting lineman in the first half (knee injury). In a game like tonight’s, it makes it tough when kids go down. You’re playing in a hostile environment and to top it, playing a very well-coached team that is 11-1.”