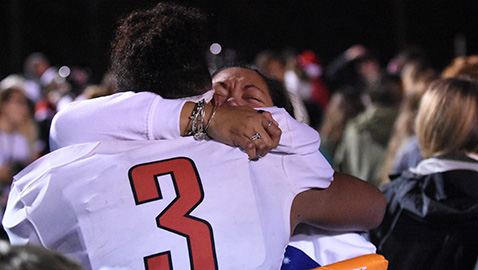 It could go down as one of the classics in TSSAA playoff history.

Both Central and South-Doyle eyed victory in a see-saw fourth quarter battle before the Bobcats nailed down a 20-16 win in the closing minutes of the Class 5A quarterfinal thriller Friday night at Billy K. Nicely Stadium.

Makhi Anderson’s 83-yard catch-and-run put Central ahead and teammate Jaidin Horton’s interception at the Bobcats’ 30-yard line with 29 seconds remaining secured a fourth straight trip to the state semifinals for the guys from Fountain City.

“It was an amazing game,” said Central senior linebacker Tyler Bost. “We played a helluva game and so did they. We just ended up being on top.”

The defending state champion Bobcats (11-2) have won three in a row since losing their last two regular season games, including a 38-10 loss to South-Doyle. They will host West (12-1) in the semifinals Friday night at 7. The Rebels knocked off previously unbeaten Powell 31-14 to advance.

“I’m proud of us,” added Bost, one of Central’s top tacklers in the battle. “We took a little dip into the valley with those two losses, but we bounced back stronger than ever and honestly I believe we can ride this all the way to the state championship.”

Bost felt “stopping the run” and Elijah Young was the key to the win.

“We bogged down every hole and he had to go out to the edge or he was tackled in the backfield,” said Bost. “Our whole package was making sure he couldn’t escape and didn’t have a cut back lane.”

Young, South-Doyle’s star running back who has committed to Missouri, carried the ball 31 times for 121 yards, but on 14 attempts he netted two yards or less.

Young was emotional after the season-ending loss.

“I don’t know what to say. It doesn’t seem real at all. I felt like we played our butts off. There was nothing else we could do. The game will take care of the rest.”

As for Central, Young said, “It’s a great team.”

Young did play a part in his team’s biggest play of the game. The lefthander pulled up and tossed a 50-yard touchdown pass to his brother Ezra Young that gave the Cherokees their 10-0 lead with 7:16 showing on the third quarter clock.

A 25-yard field goal by junior kicker Ewan Johnson, who played a key role all night long for S-D, had given S-D a 3-0 lead in the first half.

Central went to an up-tempo offense after falling behind by 10 and drove 75 yards in six plays to get on the scoreboard with 2:41 left in the third quarter. Quarterback Dakota Fawver completed two passes to Isaiah Osborne and had runs of 17 and 15 yards himself. A diving catch in the end zone by Liam Fortner capped the march. Jarred Swislosky’s PAT kick pulled the Bobcats to within 10-7.

Fawver felt the up-tempo offense was one of the keys to the win.

“It helped us quite a bit. When we went up-tempo, they weren’t able to adjust very fast and we were able to get our play call in and run plays before they were ever set.”

South-Doyle came close to answering with a 61-yard breakaway run by Noah Myers, but he was tripped up by Horton and fell at the Central 11-yard line. The Cherokees had to settle for a 24-yard field goal by Johnson and led 13-7 with 11:21 left in the final quarter.

A 29-yard keeper by Fawver sandwiched between passes of 19 and 20 yards to Anderson highlighted an 80-yard march that gave Central its first lead. On fourth-and-goal at the 1, Jason Merritts plunged into a pile at the goal line. A suspenseful second or two passed before officials signaled touchdown. Swislosky’s kick made it 14-13 with 8:31 to go.

Johnson got a second chance for his third field goal when Central was flagged for running into the kicker. He connected from 29 yards out and South-Doyle was back on top 16-14 at 2:29.

But Anderson responded with the winning play, catching a slant pass over the middle, splitting two defenders and racing to paydirt.

“I saw nothing but green grass,” he said.

South-Doyle quarterback Mason Brang, in his second game back after being injured in Week 3, gave Cherokee fans some hope when he completed a 22-yard pass to Terrell Brown for a first down at the 50 with the clock inside a minute. Another completion to Nate Adebayo put the ball at the 42.

Horton, however, picked off Brang’s pass on the next play, and all that was left to do was for Fawver to take a knee.

“It helped having Eunique Valentine and Isaiah Osborne back,” said Fawver. “They didn’t play in the first game. They made big plays tonight. We also were able to open up the passing game a little bit more this time and it helped us run a little bit more effectively.”

Central Coach Bryson Rosser praised the resiliency of his team.

“That’s one of the things we’re built on. It’s one of our core values and our guys completely entrusted the game plan, entrusted the vision. We talk about the whole 48 minutes of playing and they played all the way to the end. They had to do that to win this game against a really good South-Doyle team.”

Clark Duncan, veteran South-Doyle coach, said he hated to see the season come to an end.

“It’s disappointing, but at the same time we look back and realize it was a great year and a great bunch of young men that played for us the last four years.”

STATISTICS: Fawver completed 17 of 26 passes for 264 yards, two TDs and one interception. He also rushed for 52 yards on nine carries.