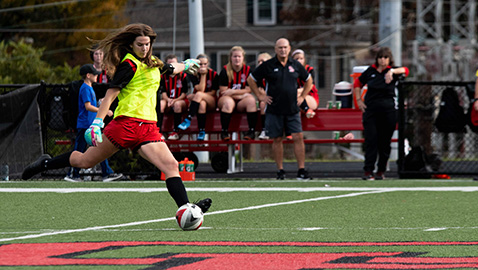 The Knoxville Central girls’ soccer team this week will be going to where the Lady Bobcats have never been – the TSSAA state tournament!

Central earned its first Class AA state berth by defeating Seymour 4-3 on penalty kicks Saturday, Oct. 26, in the state sectional round in Fountain City. The two teams had battled to a 2-2 tie through overtime.

“This is the third year we have played Seymour in Sectionals,” pointed out Mize. “Third time was the charm.”

Central and Seymour also had battled to a 2-2 draw in regular season.

“I felt like if we got to a shootout, the match would be ours,” said Mize. “Ashton Blair is the best keeper we have ever had and I think arguably the best in the state and she is who you want between those posts in a shootout.”

Lyric Fowler led the way on the field in the sectionals.

“We were down 1-0 with less than five minutes left when she got the tying goal with a nice left foot shot surrounded by five defenders,” recalled Mize. “Then when we got down 2-1 in the second overtime, she beat the back line of Seymour to get to the goal line and ripped a beautiful driven cross in front of the goal that senior Kyleigh Haught was able to finish.”

Pack the bags, here comes Central. But wait, Mother Nature had other plans. Rains had drenched the fields at Richard Siegel Soccer Complex in Murfreesboro, plus the projected forecast caused the TSSAA to postpone the state tourney until this week.

“The postponement was a real disaster for us,” explained Coach Mize. “My assistant Coach Kellie Gilliam has to travel to California for a event that can’t be changed. The girls were upset and I know I really lean on Kellie, so it was going to be a loss for us all.

“The only plus to the delay is we were really banged up from two back to back overtime matches. The regional final against Gibbs was extremely physical and several players were not 100 percent for Seymour. The rest will allow us to heal up all those injuries.”

Haught is Central’s leading scorer this season with 21 goals and five assists. Fowler is second with 17 goals and seven assists. Adyanna Brown is the Lady Bobcats’ Center Back and defensive leader, according to Mize.

Blair did not surrender a single goal in district play. Only two goals were scored against her in the three regional and sectional matches, noted Mize.

Catholic also will represent Knox County in this week’s state tourney. The Fighting Irish (12-7) face Briarcrest (15-1-1) in the Division II-AA semifinals Thursday at 4:30. The winner advances to the finals Friday at 6:30.

Tate may have been as excited about the Bulldogs’ win over the Hilltoppers as he was of his incredible streak.

“Yes, I made it to 500 at Science Hill on Friday Night,” confirmed Jack. “Great win for Bearden to secure a playoff spot and No. 3 seed.

“I was recognized at Bearden last Friday (Oct. 25) when we played Morristown West. They announced that my 500th straight game would come at Science Hill.”

Tate was named an Honorary Captain at the Morristown West game and walked out to midfield with the four Bearden captains for the coin toss.

“That was very meaningful to me.  Something I’ll never forget,” said Tate, a Bearden grad who still works as a retired teacher at Bearden and also is the school’s Sports Information Director.

“At the Science Hill game, it was pretty emotional for me, especially since we played so well and got our first win ever at Science Hill.

“I’ll now go for 501 at our playoff game next week at McMinn County!”

FULTON LOSES QB: Tommy Sweat, Fulton’s junior quarterback, suffered a broken ankle in the second quarter of the Falcons’ Week 10 game against West. He was expected to have surgery last week or as soon as the swelling goes down.

“I talked to the doctor and they think everything will be fine,” said Coach Rob Black.

Jeffrey Riddle was slated to step in for Sweat against Oak Ridge Friday night. Riddle, also a junior, missed the first seven weeks of the season with a knee injury. He had been playing receiver the past couple of weeks but originally had been expected to be Fulton’s backup QB this season.

The Falcons upset Oak Ridge to land a playoff berth.

HOURS WELL SPENT: Bryson Rosser’s Central football team did over 600 hours of community service in the 2018-19 school year, bringing the total to over 2,000 hours since Rosser started coaching at the school.

JERSEY PRESENTATION: More than 90 of the nation’s premier players have been selected by ESPN Recruiting to participate in the 2020 Under Armour All-America game. Knoxville Catholic senior lineman Bryn Tucker, a Clemson commit, is one of the selections to play in the game, which will take place in Orlando on Jan. 2.