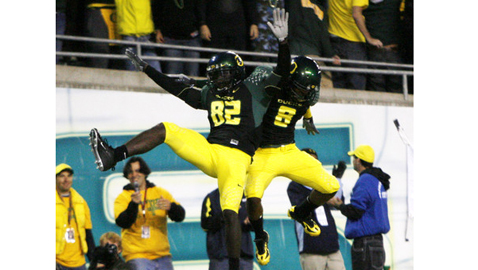 Over 10 years ago, Terence Scott went across the country to chase a dream.  In a month or so, he plans to move back home to do what he can to help Knoxville bring an end to a nightmare.

The dream for Scott, a Central High All-State defensive back as a senior in 2004, was to play Division 1 college football. He succeeded in that as an outstanding wide receiver at the University of Oregon, where he played in 2007 and 2008.

The nightmare Terence wants to see his hometown wake up from is seven fatal shootings since Nov. 1, including Fulton High sophomore Zaevion Dobbs who was shot Dec. 17 as he shielded two friends from gunfire in Lonsdale. The 15-year-old’s heroics drew praise from President Barak Obama.

Scott, who continued to reside in Eugene, Ore., after his collegiate career and giving pro ball a shot in the Canadian Football League, surprised his mother, Terri Robinson, by coming home for the holidays this past December.

“As I got home, I started realizing there’s a lot that’s going on around Knoxville … I don’t know where I fit in to help out, but I know I fit in somewhere.”

Scott, who graduated from the University of Oregon with a Bachelor of Arts degree in psychology, plans to move back to Knoxville in late February and “invest three years” in his hometown, maybe longer.

Scott had such an enjoyable homecoming he extended his stay beyond 10 days.

“Family first,” he explained. “It was too soon to leave.”

Shanda, one of his four sisters, was the only one who knew Terence was coming in.

“I hadn’t seen my mother in about six years,” said Scott. “For Christmas we surprised her. When I walked through the door I could tell – to hear her tears, her joy, her happiness and to feel how she was holding me – I just couldn’t leave that soon. I got so caught up in doing everything. You only have one mother.”

Scott, now 29, had to overcome many hurdles as a youngster, living in Christenberry Heights and many other locations in Knoxville. He had to grow up without his father being in his life and with a mother who he said was addicted to drugs and alcohol until he was around 10 years old.

Fortunately, Terence had four older sisters who played a big part in taking care of him.

“My sisters did do a good job of spoiling me – each one of them, from my oldest sister Tee to my youngest sister Dee-Dee, and the twins in between (Wanda and Shanda). They just watched out for me. I wasn’t someone able to be in the streets all the time. I never really could leave the porch to be honest with you,” Terence chuckled.

Scott also is thankful for his coaches in the Gladiators youth football program who went out of their way to help him get to play the game he loved.

When he was a junior playing under Coach Joel Helton at Central High, Scott realized he had the potential to play college football, but he was in resource classes and behind in academic credits he would need to have to play on the next level.

He received help at CHS from a guidance counselor who motivated him, from teachers who gave their time when he skipped lunch to catch up on his studies and from principal Mr. Perry’s wife who tutored him after school hours.

Scott passed the biology and math classes he needed and earned his high school diploma.

He qualified as a “Prop 48” student-athlete at Marshall, but the university in West Virginia ended up giving a full scholarship to another player.

“Looking back now, that was one of my tough hurdles,” said Terence. “My dream was always to play Division 1 football.”

Scott was left to choose from two junior colleges – one in Mississippi and the other in California. His mom and sisters loaned him money and he chose the College of Canyons in Santa Clarita, Calif.

Homesickness hit him hard as he left behind his mother and sisters.

“I guess you could say that’s when the journey began,” said Scott. “At 18, I felt it was something I needed to do for my nephews so they could see a different path hopefully and also for the kids around the community.”

“The first year was really hard,” he recalled. “Homesickness for me was the toughest thing I had to go through. Football was the easy part.”

Terence remembers phone calls to his mother and the time zone difference.

“She wouldn’t let me give up. Out of this whole dream, it was her who had to do the sacrificing, because I’m the only boy and she had to let me go. And to think back how strong of a woman she was, it’s an amazing thing.”

“She is my beautiful black queen.”

Scott said his mother has been sober for 18 years and now works with Bradford Health Services in Knoxville, helping young people and older people get off drugs and she loves it.

“She always has a smile on her face,” said Terence. “To know the things that she’s gone through in life and that she’s still standing, it reassures me that I’ll be okay in whatever is next for me.”

Part 2 – ‘Catching’ on at College of the Canyons.